E2M5: The Catacombs is the fifth level in the Hell's Maw episode of Heretic. It uses the music track "Elf", created by Kevin Schilder. 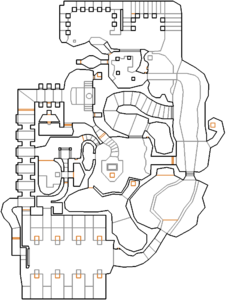 Go up the steps in front of you to a junction, take the Dragon Claw here if needed then go west up some more stairs, passing a few gargoyles, until you get to the top where you can run east to land on a pole with the yellow key on it. Go back to the junction and take the east staircase this time; when you reach the top, follow the flowing river down two levels to find a yellow key door which is protected by a few more gargoyles. Go through the door to reach a ledge overlooking a platform with the blue key on it, then turn right and press a switch; having done so, go back through the yellow key door then pass through a second door that has opened on your right, before dropping into a cavern with a single gargoyle.

Collect the items then walk towards the south wall - the east and west walls will lower to reveal more gargoyles along with sabreclaws. Collect a Silver Shield by the north wall, then go through the now-open south wall and follow the river until you drop into a wide hall with an iron lich. Go to the horse mural on the west wall and step round it to find some steps leading up to a door, open it and head past a gargoyle to enter a tunnel with a number of sabreclaws. Follow the tunnel north until you see an opening in the wall on your right, go through it then head east and south to find a Mystic Urn in front of a switch; the switch will raise some stairs leading up to the blue key. Go round to the south-west corner of the room and step on the gray pillar that lowers nearby; once it rises, look east to see the green key being guarded by gargoyles.

Go back to the tunnel and open the green key door at the north end, then head east to a chamber with gargoyles and one or two weredragons. Open the door in the south-east corner to find the stairs you raised earlier and climb them to get to the blue key, then go back to the previous chamber and open the south-west door next to the blue gizmo. Follow a hallway past one or two sabreclaws to the exit door, and open it to confront a disciple of D'Sparil which is protecting the exit teleporter.

From the start, head up the east staircase. When you get to the top, look for a switch on the west wall that will lower the nearby river, revealing a stone chamber with several items including a Bag of Holding; if you open the rock wall in the north-west corner you can reach a ledge with Gauntlets of the Necromancer. You can also reach this ledge by using the teleporter behind the blue key platform.

Sidedef 791, behind the horseman mural in the water-filled southern hall, lacks an upper texture. This causes the ceiling flat of the lower ceiling to leak over the wall.