E2M5 is the fifth map of the second episode of Heroes. It was originally designed by Craig J. Dudle as KILLZONE.WAD, then modified by Albert Dewey for the compilation. It uses the music track "". 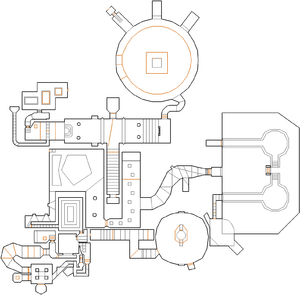 Secret exit: After getting the red key, head back to the circular room near #1. Directly opposite the teleporter is a red door, behind which is the secret exit switch.