E2M6: Abyss is the sixth map in the Hellbound episode of Masters of Chaos. It was designed by Doom_Warrior and uses the music track from Heretic's E3M8: D'Sparil's Keep.

This level contains a secret exit to E2M10: The Fountain of Youth. 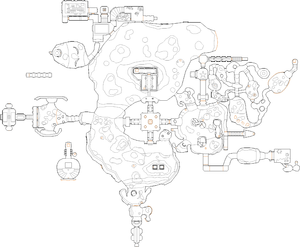 Map of Abyss
Letters in italics refer to marked spots on the map. Sector, thing, and linedef numbers in boldface are secrets which count toward the end-of-level tally.

This level includes a number of areas where you must jump between platforms over lava. Some of the pits are inescapable, so consider saving if you do not have a Chaos Device to hand.

Go round the rock in front of you to enter a large cavern, watching out for a Bormereth on a platform in front of you. Kill the monsters here and take the Hellstaff they were guarding, then head north along the walkway, past a door with green key gizmos, until you reach a teleporter. Step into it to enter a fenced area, then head north-west to another teleporter which will send you to another walkway in the cavern.

You will see a door with blue key gizmos in front of you, guarded by golems. Turn right and head up the steps to a lift and ride it up, then follow the walkway past a number of enemies until you reach a Dragon Claw. Turn right and shoot the switch through the fence, which will lower a wall next to you revealing weredragons. Kill them and press the switch they were guarding; the floor behind you will fall away to lava, so step back through it as quickly as possible. After crossing the lava, turn right and kill the green chaos serpents behind the wall which has just opened. Step through the wall slowly, as several crushing ceilings will be activated when you start moving through the passage. Navigate your way through them and take the green key waiting at the end.

Stepping on the plinth with the green key lowers the wall in front of you, revealing one or more disciples of D'Sparil. Step into the teleporter behind them to return to an earlier walkway, then turn round and walk round the rock in front of you to reach the door flanked by green key gizmos. You will enter a large room with four exits leading away from it - destroy the sabreclaws and iron lich here, then go through the south door to enter another cavern.

Just on your left is a platform with two small towers guarded by nitrogolems - you can get there by heading south and jumping across two smaller platforms. Once you reach the towers, take the Timebombs of the Ancients inside them then make a running jump south to another platform, before jumping once more to the other side of the cavern. (If you fall in the lava, head west to a teleporter which will return you to the north side of the cavern.) Once you have crossed the platforms, head south-west into an area with a gray floor and make your way through, watching out for enemies appearing from all sides. When you see a pillar of lava on your left, move slowly past it as the floor in front of you will fall away to lava. Make a running jump south-east to a brown ledge with weredragons, then jump south-west to get past the lava pit.

Climb either staircase to a room with nitrogolems overhead. Kill the undead warriors ahead of you and press the switch they were guarding, then retrace your steps past the lava pit and back to the central crossroads (after returning to the central cavern, head north off the ledge and into the teleporter at the bottom of the pit to save time). Back at the crossroads, go through the north door and defeat the sabreclaws here to enter another cave. Head north up the stairs to enter the stone building in front of you; there will be disciples hiding on the ledges above you. Go through the stone door ahead and turn left to see another teleporter guarded by fire gargoyles (plus golems on medium and hard skill levels). Head into the teleporter to be sent to an enclosed chamber.

The room ahead contains nitrogolems, joined by undead warriors on easy skill levels or ophidians on medium and hard. Climb the stairs and take the Chaos Device at the top, then press the switch in front of the lava waterfall. This opens the final door at the central crossroads, but also releases a number of disciples from alcoves near the teleporter. Kill them and use the teleporter to get back to the earlier building, then retrace your steps to the crossroads and go through the west door. Kill the nitrogolems here and head west across the platforms to a tunnel defended by nitrogolem ghosts. Head west down the steps and through the rock columns, then take the Ethereal Crossbow in the center of the cave and use it to slay the weredragons that are revealed to the north and south, as well as the Bormereth through the archways to the west.

Once the Bormereth is killed, a door to the west will open. Go through it to a room with a magma pit, surrounded by a narrow ledge guarded by weredragons. Move slowly along the ledge to its north and south sides and press the switches here; these will raise a bridge and lower the central pillar holding the blue key. Once both switches are pressed, cross the bridges and take the key - watch out for the undead warriors that are revealed behind the west wall.

Backtrack to the crossroads and go east through the green key door. Pass the rock column and turn left into the teleporter, then head forward into a second teleporter which will put you on a walkway with the blue key door in front of you. Open the door and destroy the sabreclaws waiting behind it, then head forward into a room with a star-shaped light (there will be a Ring of Invincibility here on easy and medium skill levels). When you enter the room, bars will lower behind you and a maulotaur will be revealed on your left guarding a Map Scroll; once the maulotaur is dead, head north through the door that opens.

Kill one or two sabreclaws waiting behind the door and step into the octagonal chamber to be carried up to a hallway. Follow the hallway to a door and go through it, then step into the round portal to be teleported to a cave. Go north-west through the tunnel in front of you and turn left at the junction to find a room with lava pits and weredragons. Leave the chamber through the west doorway and jump over the pit ahead to a passage - follow it past some weredragons until you reach a tall room with a stepped platform. Jump to the platform and press the switch here.

Turn round and jump back into the passage, follow it back to where you jumped over the pit and drop down to the floor below. Turn right and head through the bars which have now opened. The tunnel ahead is filled with magma, so you will need to leap between the platforms to avoid being injured - some of the platforms will sink when stood on so watch out. When you reach safe ground, follow the passage past a number of sabreclaws to a cave filled with lava. Jump across the platforms here and follow the steps to a teleporter.

You will arrive in an enclosed area in the starting cavern. Head forward and step into another teleporter to be sent to a narrow walkway - carefully follow this and step up two platforms to a switch surrounded by serpent torches. Press the switch then look left to see a wall opening in the lava below you; ready healing items or a Ring of Invincibility then go north-west to drop into the lava and through the wall you just opened. Follow the tunnel until you can jump to a tall platform, then head north across more platforms to a teleporter flanked by braziers.

You will find yourself in a stone passage. Head forward into the next room, watching out for enemies that are released from an alcove behind you. Go west and climb a staircase to a hall with a yellow floor containing disciples and fire gargoyles, then go to the north-west corner of this room and head through the wooden door. Follow the hallway and go through another door, then turn right to see a room full of crates and pickups, guarded by fire gargoyles and sabreclaws.

After collecting the items, leave the room through the east doorway and go through the stone door on your right to return to the yellow hall. Head south to a door that has now opened, killing the weredragon that emerges from it, and follow the passage to a round stone cavern with more weredragons. Head west to see a rock column in the middle of a magma pit; drop into the magma and go round the column to find a gray platform with an orange pillar behind it. Kill the gargoyles and press the switch in the east wall to lower the pillar and collect the yellow key, then jump west into the teleporter that has opened to leave the pit.

Backtrack to the yellow hall and climb the north steps to a wall flanked by yellow key gizmos. Open the wall to find a teleporter, which is guarded by a Bormereth on medium and hard skill levels, then step into the teleporter to return to the central cavern. Take the Enchanted Shield and press the switch ahead, which will lower a wall in the lava below you. Turn around and go through the wall on your right that has opened - you will drop into the lava so consider activating a Ring of Invincibility if you have one. Go south into the tunnel and through a set of bars that have now opened. Follow the tunnel to a lava pool guarded by nitrogolems and sabreclaws, plus another Bormereth on hard skill levels, then open the large door to the east and kill the sabreclaws waiting behind it.

After pressing the switch in secret #3, return to the crossroads (behind the green key door) to find that the middle pillar has lowered to reveal a teleporter. This will send you to a hallway containing various items; at the end is a teleporter to the secret level, E2M10: The Fountain of Youth.

After going through the south door at the crossroads, turn left to find a Skull Staff between two lava columns which is guarded by sabreclaws.

* The vertex count without the effect of node building is 7446.

This level contains the following numbers of things per skill level, not including items or monsters spawned via scripts: