E2M6: Foundry is the sixth map of The Shores of Hell in Doom the Way id Did. It was designed by Gus Knezevich (Alfonzo) in the style of Sandy Petersen. The par time defined in the DEHACKED lump is 1:30. 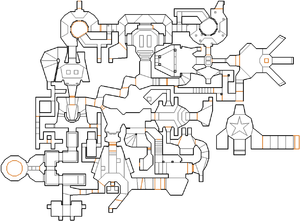 Map of Foundry
Letters in italics refer to marked spots on the map. Sector, thing, and linedef numbers in boldface are secrets which count toward the end-of-level tally.

From the start point (A), follow the path that leads around the structure to your right and descend the stairs. Continue to follow the path west and then south past the yellow key door (H) until you arrive at a teleporter (B). After stepping through the teleporter, immediately turn left and follow the winding passage eastward, dispatching the demons using the barrels provided.

Exiting the passage, open the door opposite and descend the stairs, taking heed of the cacodemon (|I'm too young to die and Hey, not too rough) or baron in the center of the next room (D). Hit the switch hidden in the northeast corner, and then quickly rush across the lift that has temporarily lowered (E) and walk through the door at the far east of the passage.

Now grab the blue skull key that sits inside the damaging pool of blood before you (F). Behind you and in the southwest of the room a door has opened. Enter through this door but do not fire upon the demons present, as they will be teleported away once they move forward. Ascend the flight of steps leading west and walk through the door to your right. Follow the familiar passage west and then south through the blue key door before its end.

Outside, wade through the water to the east (you can see the exit door through the metal bars to your right) and then drop down into a cobble-floored room (G). Dispatch the single baron and the impish lot that greet you, then pass under the southern crusher and left, ascending the small set of stairs around to a wooden door. Opening this door, eliminate the many zombies then hit the switch (H) in the area's northwest to raise a staircase underneath you. Follow the pathway up and through to the exit door.

Both the shotgun and a other provisions can be obtained by continuing south from the start point (A). Looking west from atop lift (E), a dormant baron (Hurt me plenty and higher) or cacodemon can be seen along with two imps in room (D), as well as the rocket launcher beyond the lava pit.

The southwest region of the map is entirely optional to the player, but offers much in the way of reward and exploration. Facing south from lift (C), walk around either side of the pit in front of you and step across the moving platforms. Continue until you reach the final platform, and wait until it rises before hopping into the passage. In the room to the south of this point are a number of radsuits, depending on the difficulty. Head east down the stairs from the intersection and into the lava, then immediately north into room (K), where a couple of medikits, shells, and clips await your collection. If you possess the blue key, you can head through the door on the north side to collect yet more provisions and an armor on HMP or lower.

On the south side of the same room is another blue key door set against a structure. Opening it will reveal a switch that, when flipped, activates a hidden crusher behind the wall that detonates an arrangement of barrels. The three demons that previously teleported away from the player are present in this hidden room, allowing the player to achieve 100% kills.

An additional western portion of the map can be reached by using the south facing side of lift (C). The maze that is discovered beyond the immediate "furnace" room features some rockets, shells and a teleporter (L) that will take the player back to the top of the lift.

The yellow key door (H) hides a glowing room with a layout symmetrical to the area seen at the start of the map. In addition to the plasma gun (Ultra-Violence and Nightmare!) or energy cell pack (HMP and lower) present at the room's center, the lost souls mentioned previously can be safely eliminated from behind a cage situated in the room's southwest. On HMP and lower difficulties, the plasma gun can be obtained by branching north underneath the crusher after dropping down into room (G). The rocket launcher can be obtained in room (D) by running underneath either one of the crushers flanking the lava pit.