E2M6: Halls of the Damned is the sixth map of The Shores of Hell in Doom. It was designed by Sandy Petersen and it uses the music track "Sinister." The par time is 6:00. 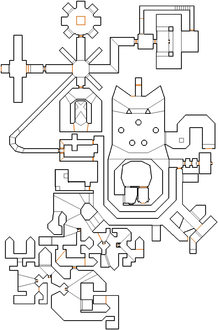 Map of Halls of the Damned
Letters in italics refer to marked spots on the map. Sector, thing, and linedef numbers in boldface are secrets which count toward the end-of-level tally.

Head into the room in front of you and turn right to find a door, behind which is a switch that will open a wall back in the start room leading to a perimeter tunnel. Head to that tunnel and take a right to enter a large open area with two nukage rivers. At the other end of the area is a berserk pack on a pedestal.

Picking it up will cause the overall area to flood and another wall to open revealing a tunnel of nukage. Head down this tunnel until you can press the switch at the end. Head back to the entrance of the nukage tunnel and make a left into the left (eastern) part of the very first tunnel you went in. The wall has lowered revealing a pair of doors, a locked exit door, which requires blue key, and the door to the main parts of the level. The locked door actually conceals two other doors that are also locked requiring red and yellow keys consistently.

All three keys are scattered in the main parts of the level behind the unlocked door. The order of collecting them is not important, however, the blue key is nearest and can be gotten nearby behind the door. The yellow key is most far, as it is located in the northern portion of the level which is explored deeper.

As soon as you open the small door, destroy all the enemies behind. The blue key can be found in the south east corner of the room, however approaching this corner will open two demon traps (imps can also be present). Instead of going there, better take right turn and left to a switch. This will open the same traps but you can therefore manage the situation by ruse. Shoot the demons via the narrow window. After the cleanup head to the skull key and grab it.

From the eastern portion of the green corridor, head westward and you will see two passageways into a wooden maze. Go all the way southward until you meet a small door. Open it to reveal a "submaze" which looks slightly different. Head to the right around the wall. Go to the west and when you can turn left and around. You will see the red skull key. Grab the key and prepare to fight with some hellspawn while going back.

Return to the green corridor from which you accessed the wooden maze. Follow this corridor northward until you will come to a dead end with two doors on the left. Both doors conceal rooms with rows of enemies, which lead to one place. Once you see a prohibitive sign, push a green button on the opposite wall. Enter the open corridor and follow it to its end. In the room turn right and enter another room (south). Note that if the door closed while you are inside this room you cannot escape without the yellow key. Fight all enemies there, then take the yellow skull key, as well as two awards, light amplification visor and blur sphere.

The "hanging leg" decoration in the starting area (Thing 274) has no flags set for any of the difficulty classes, so it does not actually appear in the level.

In the hidden alcove between the blue key and wood maze, two extra demons appear in ultra-violence on top of two other demons, rendering them immobile. This blocks the baron of Hell until one of the demons is killed.

The crossable linedef 302, located in the wood maze to the left of the backpack, has line type 2 "W1 Open Door" on it. Because the line also features a non-zero, but unused tag (11), crossing it has no ill effects on the level.

Like in many of the preceding areas, there is an "entrance door" (DOOR3) right behind the player's start location. However on this level, there is a corridor running right behind the start room leaving no room for even a possible teleporter pad behind the door. While not being a proper bug, it is rather an oddity in level design.

Linedef 1091 lacks an upper texture on its back side, causing a little bleeding.

* The vertex count without the effect of node building is 886.

According to Sandy Petersen, John Romero came up with the idea to have a fake exit, though Petersen was given free reign on how to implement it.[1]

The official French name of this level is Halls des damnés (accents are not reflected in the game itself due to technical limitations).