E2M6: Poison Control is the sixth map of episode The Depths of Doom of No End In Sight. It was designed by Christopher Lutz. 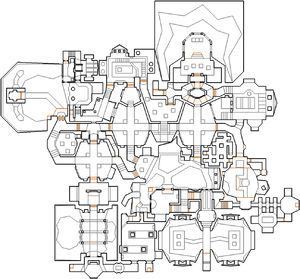 Map of Poison Control
Letters in italics refer to marked spots on the map. Sector, thing, and linedef numbers in boldface are secrets which count toward the end-of-level tally.

Cross the bridge in front of you, turn left and go down the steps to kill a zombieman then turn left again and go down a staircase to a door. Open the door and kill the imps and zombiemen waiting behind it then go north through another door to a Y-shaped walkway over nukage that is overlooked by more imps and some other enemies. Head north-east to a silver door and go through it to a cross-shaped intersection, then head due north to two lifts guarded by a demon and ride either lift up to a small octagon-shaped passage. Use another lift at the north side of this passage to reach the top floor then go through a UAC door to reach a larger room containing the blue keycard and several monsters. When you go down the steps to the key, two closets containing zombies, imps and lost souls will open behind you.

Backtrack to the Y-shaped walkway and head north-west to two doors, then go through the left-hand door (which has blue lights and requires the blue key) and follow the passage to another cross-shaped intersection. Take the south path to a lift and ride it up to a room with imps and demons, then head south through another door and run across a walkway to a chamber with two demons (or a cacodemon on Hurt Me Plenty skill level or higher). Head east and drop down a hole to a room with an S-shaped walkway, then go north to a blue-floored passage containing a demon and press the switch behind it to lower a nearby lift, which you can ride up to the yellow keycard.

You now need to retrace your steps to the cross-shaped intersection on the west side of the level, but several monster closets have opened along your route - after returning to the S-shaped walkway use the teleporter in the south-east corner to return to the top of the hole you dropped down later, then head north back across the walkway and watch out for two walls that lower on either side to reveal enemies along with armor and a radiation shielding suit. Back at the intersection, head through the north door to find a chaingun then walk through the narrow doorway behind it and turn left to find a staircase leading down to a dark walkway. Follow the walkway all the way round until you reach a small gray button, which you can press to raise a bridge over the large nukage pool to the south. Backtrack to where you found the chaingun and head through the west door, then head north through another door requiring the yellow key, cross the bridge you just raised and open the door on the other side to find a cacodemon guarding the exit switch.

As soon as the level starts, cross the bridge and turn right to see a chaingun. When you approach the weapon, the wall behind it will lower to reveal a cacodemon.

A shotgun can be found south-west of the Y-shaped walkway. Taking it will open a closet to the north with imps and demons.

From the cross-shaped intersection on the east side of the level, go through the east door and follow the passage round to a switch that will lower a nearby lift. Ride the lift up and turn right to go through a small door leading to a maze with health bonuses, armor bonuses and a chainsaw, as well as a switch - flip this switch then leave the maze to find that a bridge has risen over the nukage pit to the south. Cross the bridge then turn left and run past three crushing ceilings to reach a plasma gun.

South of the yellow key door leading to the exit is a nukage pool with three caged imps. Step past the cages to find a rocket launcher and four rockets.

In secret 7, it is possible to be trapped because the switch is one time only and there are no other ways in or out of said area.

* The vertex count without the effect of node building is 2463.