E2M6: The Labyrinth is the sixth level in the Hell's Maw episode of Heretic. It uses the music track "Onyx", created by Kevin Schilder. 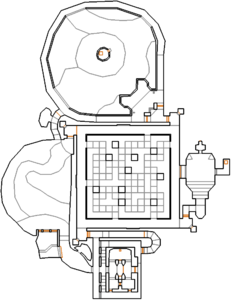 Map of The Labyrinth
Letters in italics refer to marked spots on the map. Sector, thing, and linedef numbers in boldface are secrets which count toward the end-of-level tally.

Open the door in front of you and kill any gargoyles and weredragons waiting outside, then follow the ice path north between two lava pools to reach a door leading to the labyrinth room. Enter the labyrinth through the north-western doorway and follow the steps up to a junction with an Ethereal Crossbow, then go east at the first junction and south at a second junction to reach the yellow key - watch out for gargoyles and fire gargoyles emerging from the gaps in the surrounding walls. Leave the labyrinth by any route then go to the north-east corner of the room to find a yellow key door.

Open the yellow key door and kill any gargoyles waiting behind it, then proceed west or north through another door to get on to a catwalk which runs around a large ice pit containing more gargoyles as well as sabreclaws. Step over any of the low walls around the catwalk to drop into the arena, then head for the wooden column near the center and blow up the pods on the east side of this column to clear your path to a door, then open it to find the green key being guarded by another sabreclaw. Enter the nearby teleporter to land on a Dragon Claw next to the yellow key door, then go back through that door before proceeding to the south-west corner of the labyrinth room to find a green key door.

Go through the green key door and turn right to kill one or more approaching weredragons, then proceed south until you see an opening in the wall on your left leading to a Tome of Power. Go down the south staircase then follow the hallway east and north past some gargoyles until you reach a door in the west wall, then open it to fire more gargoyles guarding the blue key. With the blue key in your possession, head back to the labyrinth room and go to the blue key door in the south-east corner; open this door then push past some golems and nitrogolems to a square chamber. Press the switch at the north end of the chamber, which is guarded by one or two disciples of D'Sparil, to open the stained-glass window in the east wall and reveal an iron lich. Destroy the lich then step through the window to find a Mystic Urn, a Phoenix Rod and the exit teleporter.

After getting the blue key, head east through a door then look north to see that a wall has lowered revealing a second door to the east. Go up the steps, which hold stacks of Mace Spheres and a Pile of Mace Spheres (two of the stacks are replaced with Flame Orbs on thou art a smite-meister (TAASM) and black plague possesses thee (BPPT) skill levels), to reach a hallway with a Map Scroll.

* The vertex count without the effect of node building is 846.