E2M6: Trial of the Maulotaur is the sixth map in the Mount Suffering episode of Heretic Upstart Mapping Project. It was designed by Philnemba and uses the music track "". 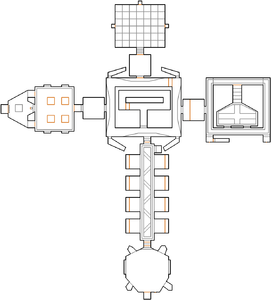 Map of Trial of the Maulotaur
Letters in italics refer to marked spots on the map. Sector, thing, and linedef numbers in boldface are secrets which count toward the end-of-level tally.

As its name suggests, this level contains fifteen maulotaurs and no other enemies.

As the level starts you will see a Phoenix Rod, a Hellstaff and possibly a Firemace in front of you as well as a Bag of Holding and a Tome of Power plus some large ammo pickups. Take all the items then shoot the metal barrier at the north end of the hall to open it, and alert eight caged maulotaurs who will teleport to other areas of the level. Go through the barrier to a rectangular water pool and walk anti-clockwise around it, collecting any Mystic Urns and/or Quartz Flasks you encounter, until you walk past the north-west corner, then go back to the room entrance to find that a wall has lowered leading to the middle of the room. Turn left at the T-junction and walk into the south-west corner of the inner loop; as you do so you will cross two lines that will open the east and west doors leading out of the room.

Go through the east door to find a Silver Shield, a Tome of Power and some large ammo pickups; the door will close behind you as you approach the items. Continue on to a rectangular wooden walkway over a sludge pool then turn left and follow the walkway round until you see some steps on your right leading up to the yellow key. Going up the steps will open an alcove by the south-east corner of the walkway and release a maulotaur; enter the alcove and press the switch on the back wall to open a second alcove in the south-west corner containing another maulotaur, as well as another switch that will re-open the door leading back to the water area.

Go back to the water area and head through the west door to find a Mystic Urn, a Tome of Power and large ammo pickups, then continue on to a room with four maulotaurs on silver platforms - ignore them if possible and press either of the switches on the other side of the room to lower a pair of lifts, which you can ride up to a fifth maulotaur guarding a small switch. Press the switch to lower a set of bars behind the maulotaur then step into the glitter behind the bars; you will telefrag all five of the maulotaurs and collect a blue key at the end.

Return to the water area and open the north door (requiring the blue key) to find a Shadowsphere, a Tome of Power and more large ammo pickups. Use caution before heading into the next room, as there are three maulotaurs on guard and a number of crushers will activate when you enter the room; cross the room to collect the green key from the north alcove, then enter the west and east alcoves to find an Enchanted Shield and a Chaos Device which you should activate immediately to return to the start. Back at the start, open the green and yellow key doors behind you to enter a yellow room with another maulotaur then go round it to press the switch in the south-east corner; this will cause the floor to lower until it reaches the exit teleporter, which has one more maulotaur stuck on it.

* The vertex count without the effect of node building is 555.