E2M6: Veil of Blood is the sixth map of Cleimos. It was designed by Rand and Steven Phares.

It was adapted into MAP10 of Cleimos 2. 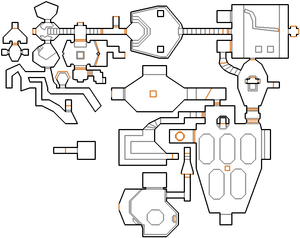 The room symmetrically opposite #3 contains an invulnerability. However, it is impossible to enter this room, so only 87% items can be obtained.