E2M7: Dark Passage is the seventh map of episode The Shores of Hell in Doom the Way id Did: The Lost Episodes. It was designed by Chris Pisarczyk (Mr. Chris), Callum Guy Oliver (phobosdeimos1), and Jeff Shark (Marnetmar). It also received standalone releases as "The Damned" in November 2012 and "Dark Passage" in July 2013. 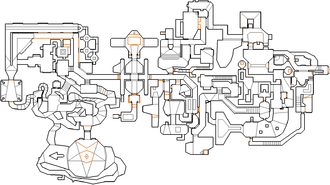 Map of Dark Passage
Letters in italics refer to marked spots on the map. Sector, thing, and linedef numbers in boldface are secrets which count toward the end-of-level tally.

Secret #6 is not accessible without cheating, meaning that only 90% secrets is possible on this map.

* The vertex count without the effect of node building is 2262.