E2M7: Deep Blue is the fifth map in episode The Badlands of HUMP mini. It was designed by Walter Confalonieri (daimon) and uses the music track "". 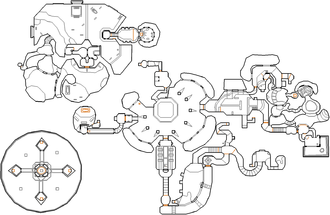 Map of Deep Blue
Letters in italics refer to marked spots on the map. Sector, thing, and linedef numbers in boldface are secrets which count toward the end-of-level tally.

This level offers no weapons other than Gauntlets of the Necromancer, but does other a generous supply of Timebombs of the Ancients and Morph Ovums. Use them to help you clear the opposition.

As the level starts you will be face to face with an iron lich; wait for it to fire a whirlwind and use this to propel yourself up to the surrounding blue ledge, then go through the doorway in the north-west wall and follow the passage to a Quartz Flask. You will be teleported into an open area with wooden columns and three exits; go through the moss-covered doorway on your right and open the stone door to confront some gargoyles, then head down the steps and kill a nitrogolem waiting at the end of a hallway lined with pods. Once the nitrogolem is dead, make sure you quickly pass through the door at the end of the hallway; when you approach it two crushers will fall on the pods, blowing them up and killing anything that remains in the hall. Follow the trail of Wand Crystals round to a room with two gargoyles and a nitrogolem ghost then step on the coffin to be teleported elsewhere.

You will rise out of a grave in an outdoor area. Step out of the grave (collecting the Gauntlets as you do so) and head east into some water, kill any waiting gargoyles then go through the silver door here to find more gargoyles guarding two metal doorways. Go through the right-hand doorway and walk round a weredragon to another doorway that leads back outside, then go north and north-east to find some steps leading up to a sandstone ledge with Wand Crystals. Follow the ledge round to a switch and press it, dodge the enemies that teleport in near the gravestones then go back to the silver door and walk through the left-hand metal doorway this time, where some wooden bars have opened allowing you to reach a Bag of Holding and a second switch. After pressing this switch, go back to where you found the first switch and you will see that some more bars have opened letting you enter the nearby building. Go down the steps to collect four Morph Ovums and a Tome of Power, then pick up the green key just ahead - you will be dropped into an icy cavern with a Chaos Device, which you should activate immediately to return to the starting point.

Destroy the iron lich if you have not done so already, then head east to a door between two green gizmos and open it to confront some golems and nitrogolems. There is a lava pit directly ahead of you; equip a Quartz Flask if you have one then drop into the pit and run to the south-east corner to find a Tome of Power as well as a dark passage leading to a switch, which will open the metal walls inside the pit and reveal a steep staircase leading up to two undead warriors. Head past the warriors to a silver door and kill some gargoyles waiting behind it, then follow the wooden path and climb some steps that raise automatically to another door with another undead warrior behind it, as well as a golem or sabreclaw depending on skill level. Go through either of the doorways (taking a Morph Ovum as you do so) to a stone chamber with two fire gargoyles and disciples of D'Sparil, then press the switch on the metal column to lower the yellow key.

After taking the yellow key, destroy the fire gargoyles and golem ghosts that teleport in behind you before leaving the chamber then backtrack to the blue central area; the quickest (albeit damaging) way is to return to the lava pit then run west through the volcanoes to a lift that leads back up to the green key door. Back in the central area, open the south door between the yellow gizmos to enter a chapel with nitrogolems and a weredragon (plus two ophidians on bringest them oneth or higher), then look behind the altar to find a switch that will raise a set of stairs just behind you. Go up the stairs and open the door at the top to face an ophidian, then turn left to see a curved passage with three sets of crushers as well as various enemies; watch out for the disciples that can attack you through the windows as well. Go through the door at the end of the passage to find a Tome of Power then turn right and follow the path past various enemies until you reach water; from here you can drop down two waterfalls to find an undead warrior guarding two Morph Ovums as well as Wings of Wrath.

The final section of the level must be completed before the Wings expire, or you will not be able to reach the exit. Activate the Wings then fly up the waterfalls you just dropped down before heading west to a teleporter on a green ledge; after passing through the teleporter, follow the tunnel across another water pool then head west down some steps to a lava pit which you must fly across to reach another teleporter. Once you do so, walk straight forward (west) and go through the door that opens in front of you to find the exit teleporter (there are three other teleporters in the exit area, but they all lead to death-traps.)

If you are playing from a wand start and somehow destroy the iron lich at the start before leaving the pit, it will be impossible to get out without cheating. In continuous play, it is possible to escape with a rocket jump if you have brought a Phoenix Rod from a previous level.

Pressing the switch behind the yellow key will reveal another switch in the wooden room to the north, which will lower the wall behind you and allow you to drop into a cavern with several enemies. Drop into the adjacent cavern to the north to find four Timebombs and a Ring of Invulnerability floating above a lava pit (an invisible platform stops you falling down), then continue north to drop down to another cavern with Quartz Flasks and a Chaos Device, which will instantly return you to the central area.

In the western-most area of the level you will see a Torch through a tiny window; pressing the window moves a voodoo doll into another Torch, giving you that item. Because the Torch you can actually see cannot be reached without cheating, it is impossible to get 100% items in this level.

* The vertex count without the effect of node building is 3117.