E2M7: Keep of Despair is the seventh map in the Mount Suffering episode of Heretic Upstart Mapping Project. It was designed by danielhday and uses the music track "Wait" by Kevin Schilder. 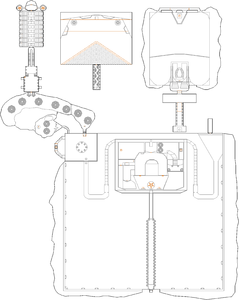 Map of Keep of Despair
Letters in italics refer to marked spots on the map. Sector, thing, and linedef numbers in boldface are secrets which count toward the end-of-level tally.

Press the switch on your right to lower the floor, taking you down to a long bridge with golems. Follow the bridge until you reach the large gray building in front of you, then turn left and follow the path until you reach the north-west corner where a set of steps lead down to a wooden walkway over sludge. Follow the walkway into a large hall and kill any waiting golems, nitrogolems and fire gargoyles, take the Ethereal Crossbow sitting on the blue dais then go through the door in the north-west corner to find a water pool with an iron lich and two undead warriors guarding a switch. Press the switch to lower the wall behind it and reveal a much larger cave, then head north to a door that has a large wooden hall with a disciple of D'Sparil behind it. Head north up one set of steps and down a second set to reach another hall that has ammo pickups and the green key on either side, but they are not reachable yet; go through the door at the other end of the hall to find a switch guarded by more fire gargoyles, press it then backtrack to the cave and head east to find two more iron liches in front of another switch. Press this switch to lower the lift behind it and ride this up to the yellow key.

As you drop into the room with the blue dais, the entrance doorway will be sealed; kill the waiting ophidians and disciples then go down either of the staircases behind the west wall to find a door, behind which you will find more disciples guarding a teleporter that leads back outside. Head back up to the large gray building and go to its north side to find a pair of yellow gizmos, then go inside the building to find a door with a Silver Shield behind it. Only the doorway in the south-west corner is accessible, so go through it to find some large ammo pickups protected by an iron lich and other monsters then press the switch they are guarding to lower the back wall. Head round the corner to find a Bag of Holding and open the door behind it, then round another corner to find two undead warrior ghosts guarding another switch that opens a door leading back to the center room. Go through the now-open east door and head up the stairs on your left; there are disciples, nitrogolem ghosts and a lich here, but you can ignore them and enter the teleporter on your right between the brown pillars. You will arrive in a room with a lich, a disciple and an undead warrior who are guarding the blue key.

Drop down the hole behind the blue key to return to the center room, head through either of the locked doors in the south wall then step on the pentagram teleporter ahead. You will land on a Bag of Holding as well as Inferno Orbs and Piles of Mace Spheres; head straight forward through two Quartz Flasks to a door that opens automatically to reveal an iron lich and two golems, then collect the Phoenix Rod behind them and a lift will take you down to a green chamber. Go down either of the staircases to your left or right to get outside then follow the red floor under your feet to another set of steps that lead up to a Dragon Claw, an Enchanted Shield and other items in front of a switch. Pressing the switch will lower the wall behind you revealing three maulotaurs; fight or avoid them and head for either of the doorways in the north wall, which lead to switches that you can press to lower a lift leading up to a teleporter which is guarded by a fourth maulotaur.

After stepping on the teleporter, head forward to a Tome of Power then open the door behind it; you will see D'Sparil teleport away as the door opens. Go down the steps and head towards the large door in front of you until you are teleported back to the hall that holds the green key, where steps leading up to all the pickups have risen. Use the items at your disposal to kill D'Sparil, but use caution as once he is knocked off his chaos serpent he will be able to teleport almost anywhere in the room. Once D'Sparil is killed, collect the green key and head through the north door then open either of the doors to your left or right and step on the pentagrams behind them to finish the level. If you try to reach the exits without killing D'Sparil first, you will have to get past a maulotaur which blocks your path.

* The vertex count without the effect of node building is 7644.