E2M7: Ore Processing is the seventh map of The Shores of Hell in Doom the Way id Did. It was designed by Brendt Pantley (Megalyth) in the style of John Romero. The par time defined in the DEHACKED lump is 3:15. 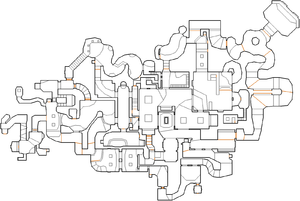 Map of Ore Processing
Letters in italics refer to marked spots on the map. Sector, thing, and linedef numbers in boldface are secrets which count toward the end-of-level tally.

Take the hallway on the left when you enter. You will need to cross the nukage to a switch which will open the right hallway. Press it and go to the right hallway. Press the switch for a shotgun and continue on. Follow the path until your next switch. Press it and ignore the red door as you backtrack. Pick up the armor and notice the wall has lowered revealing monsters and a nukage river. You will have to traverse the nukage to the next room with four paths, and along the way you will spot another red door. Go to the north side of this room as these paths are open. Take the right path and you will immediately find a fork. Head right and down the lift to the huge hall with vine-covered walls. Head into the computer room and take the lift through the hall to the north. Go up here and take the teleporter.

Press the switch at the end of the next room, and take the lift down. You will appear in the red hall with the four choices again, this time with the lower right one open and a new area in the area past the nukage river on the left path also open. Take the left path through the new passage. A bit further into the passage, and another one behind you will open. Go here and through the blood to two more paths. Take the right one. Although you will see the yellow exit door, there is also a teleporter here, so take it. Go straight across for the red keycard. Now backtrack all the way to the red door that is in the nukage river. Open it and climb the steps to a switch, lowering it and a room with a cacodemon. Open the other red door here. Now you can acquire the blue keycard. Now go back to the blood pool and take the other path, up a lift and to the blue door. Behind this door, you will have to follow a long and winding path, looking out for crushers as you do. Follow the path until it drops you onto the yellow keycard. Now with every key, backtrack once again to the blood pool taking the right of two paths. You will find the yellow door and the exit a ways behind it.

In the red room with the four paths, if you try the left path, you will eventually find a chainsaw, which you can use on demons that spawn in.

* The vertex count without the effect of node building is 1619.