E2M7: Sky Gateway is the seventh map of episode 2 of Heretic Treasure Chest. It was designed by Chris Kassap (lupinx-Kassman) and Martin Eyre (Vermil), and uses the music track "Mist" from Heretic, created by Kevin Schilder. 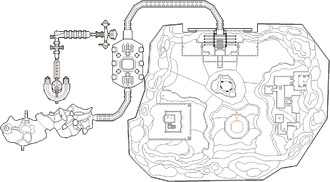 Map of Sky Gateway
Letters in italics refer to marked spots on the map. Sector, thing, and linedef numbers in boldface are secrets which count toward the end-of-level tally.

Use the Ethereal Crossbow in front of you to kill an undead warrior then open the door behind it - there are golems waiting on either side of the door and fire gargoyles blocking the staircase ahead. Open the silver door at the top to find a Dragon Claw, drop to the floor below to destroy some sabreclaws then follow the passage until you turn a corner and see some undead warriors ahead. Continue following the passage until you reach a metal door, watching out for walls that lower on either side to reveal disciples of D'Sparil as well as Claw Orbs, then open the door to find a tunnel with some nitrogolems as well as eight Quartz Flasks.

Follow the tunnel to another door and open it to confront some more nitrogolems and two ophidians (plus four fire gargoyles on hard skill levels), press the switch in the south-west corner to open the murals on either side of the room then press another switch in the south-east corner to lower four pillars with Timebombs of the Ancients - stand on any of the pillars and wait for them to rise again, then leap through the murals you just opened to enter a chamber with weredragons and sabreclaws. There are two lifts in the north-east and north-west corners of the chamber leading up to switches - press both switches then go to the south side of the chamber to find a third switch that will raise a staircase behind you. Climb the staircase to a teleporter, which will send you to a tower in the center of a large outdoor area.

In this area, stay on the move to avoid heavy fire from distant enemies. Grab the Hellstaff in front of you and use it to destroy the iron liches ahead; taking the weapon will lower a teleporter by the liches that will send you to the fort on the west side. Go round to the east side of the fort to find two metal lifts guarded by nitrogolem ghosts, use the lifts to get to the next floor with undead warrior ghosts then climb up the Timebomb-lined stairs to find a switch that will lower another teleporter next to it. The teleporter will return you to the starting point; step into another teleporter that has been revealed in front of you to reach the battlements on the east side of the open area. Follow the ledges south, east and north past nitrogolems until you climb up two staircases that are side by side, then head west to a lift that leads up to a switch. Press the switch then head east up two more sets of steps; you can climb on to the light-gray platform to find a teleporter that leads to the fortress at the north side.

At the fortress, head east or west past the nitrogolems until you reach a switch that will lower a lift behind you. Ride the lift up then head west or east respectively towards a staircase lined with braziers and go down it to find Wings of Wrath, which you must use to fly through the lava-filled tunnel ahead - the tunnel contains fire gargoyles, but avoid fighting them as if the wings expire before you clear the tunnel then you will not be able to escape or continue the level. At the end of the tunnel, take the Silver Shield then head forward into an arena with several lava-falls. Go to the south end of the arena to find a doorway which will be barred as you approach - the lava-falls will lower to reveal iron liches and disciples, which you will need to destroy while waiting for the bars to raise so you can get out.

Once you can escape, head through the doorway to find another Wings of Wrath that you must use to fly through the next lava tunnel - as before, make sure you clear the tunnel before the artifact expires. You will enter a cave with weredragons and sabreclaws - fly or run west through the cavern to reach the final cavern, which has a rock island with a Phoenix Rod, Mystic Urn, two Tomes of Power and plenty of ammo. The large lava-fall at the west side of the cavern will slowly lower to reveal the exit teleporter, but you must fight off a mass of fire gargoyles while you wait - up to 325 on hard skill levels. Once the teleporter is revealed, step into it to finish the level.

After walking through the first door at the start, head north or south to two chambers that each contain a Morph Ovum. Golem ghosts will be released into each chamber when you collect the items.

While following the long passage west of the start point, two windows will lower either side of you to reveal disciples. A Firemace can spawn by the west window.

* The vertex count without the effect of node building is 6302.