E2M7: Spawning Vats is the seventh map of The Shores of Hell in Doom. It was designed by Tom Hall and Sandy Petersen and it uses the music track "Waltz of the Demons." The par time is 4:00. As the last of the levels representing man-made complexes, Spawning Vats is in effect an amalgamation of all previous bases, including a container warehouse and a computer complex.

In the PlayStation and Sega Saturn versions, it contains an added secret exit to MAP55: Fortress of Mystery. 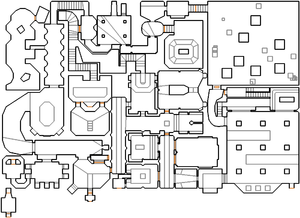 Map of Spawning Vats
Letters in italics refer to marked spots on the map. Sector, thing, and linedef numbers in boldface are secrets which count toward the end-of-level tally.

At least on ultra-violence and easier, if you warp in and start with the fist and pistol, avoid fighting the demons in that room where you start out. Instead, dodge them and run to the right (west) corridor, which will bring you to the room with the blue key door. There, you can dispatch a sergeant to get his shotgun, pickup a box of shotgun shells, and then take down the two demons easily. Do not continue past the blue key door room yet, as you do not have the ammo to deal with the tougher monsters yet.

Beware of the door that closes behind you when you enter the descending stairs to the crate room (warehouse). Before you step on the stairs, use a couple fist punches to alert some demons, which you can dispatch before getting trapped. Getting the berserk will allow you the dispatch the rest of the demons easily. Save the invulnerability for taking on the baron and cacodemons outside, where you can save ammo by using the berserk fist.

Be careful when you go through the yellow key door, as there are a large number of imps behind it and they will have been alerted to your presence, since that area is connected to the outside where you fought the baron and cacodemons. Also avoid the middle trench of the hallways which are illuminated by blue lights, since these will reduce your health.

Two "hanging leg" decorations (Things 192 and 193) and an energy cell (Thing 99) have no flags set for any of the difficulty classes, so they do not actually appear in the level.

In this level it is possible to trigger an example of the Tutti-frutti effect. Upon entering the crate room, a door closes behind the player. The door consists of two sectors. By blocking the second sector, it is possible for one sector to be closed while the other remains open. A short texture which does not vertically tile is used for the linedef between the sectors: as a result, the tutti-frutti effect appears.

All versions of this map have several linedefs with flag bits 9-15 set, which had no function.

Linedef 1286 (just in front of the south side of the yellow door), lacks a lower texture causing a small HOM effect.

A reject table blindspot causes the demon behind the blue key door to not see the player in front of the door. In total there are 27 known anomalies in this level's REJECT table.

While possibly intentional to create a puzzling, unwordly atmosphere, the southeast courtyard with the two small nukage pools has two corpses hanging from the ceiling despite it being open sky.

* The vertex count without the effect of node building is 1451.

E2M7 was the first level started for Doom, and early versions appear as E1M1 of Doom 0.3, E1M1 of Doom 0.4, and E1M11 of Doom 0.5. Originally conceived to be the Hangar 2 building described in the Doom Bible, the starting room in the alpha versions of Doom takes the form of a control room where marines gather to play cards. Doom 0.3 features the setting described originally with the marines playing cards on top of a crate, but alphas 0.4 and 0.5 change this to a control desk. This starting room would eventually become home to a single cacodemon in the released version, and the player's starting point would be moved to a room with columns that originally had no particular purpose.

The room that in the released version contains the blue keycard was originally the hangar bay area, with alphas 0.3 and 0.4 having the characteristic "number two" signs on the floor that the Doom Bible describes. Doom 0.5 changed the numbered flats to a generic UAC insignia.

The warehouse room originally featured an exit that was meant to connect to Supply Depot 2, but it was removed in the released version, and instead, a new exit was added south of the map.