E2M7: The Black Gate is the seventh map in the Hellbound episode of Masters of Chaos. It was designed by Caleb26 and uses the music track from Heretic's E1M7: The Crypts. 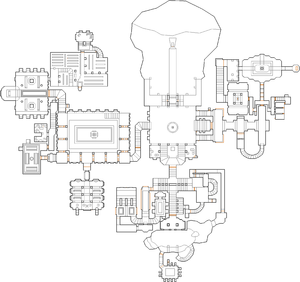 Map of The Black Gate
Letters in italics refer to marked spots on the map. Sector, thing, and linedef numbers in boldface are secrets which count toward the end-of-level tally.

You begin facing a courtyard with a fountain, overlooked by various enemies including gargoyles, fire gargoyles and Knight Archers. Take the Ethereal Crossbow and Dragon Claw from the fountain then go west up a stone staircase, killing two nitrogolems and opening the door behind them. At the top of the staircase you will find a large fountain surrounded by a path with sloped archways - head west until you see a doorway on your left with hanging corpses and go through it.

Head through two archways to a room with benches and a red floor - two ophidians and two undead warriors will rise from the floor ahead, and two archers are stood on raised platforms by the south wall. Kill the enemies and follow the red floor to a Tome of Power and a Quiver of Ethereal Arrows, then press the switch by the stained-glass window and return to the area with the large fountain.

Head west and north through more archways until you see a doorway ahead (pressing the earlier switch lowered some bars blocking the way) and press the switch just behind it, which will raise the floor and take you up to a set of steps. Kill the sabreclaws ahead and follow the steps to a door leading to a large hall. The room contains nitrogolems and undead warriors, and a Bormereth is stood behind the altar at the west end of the room. Killing the Bormereth will open a door in the north-east corner of the room - go through it now.

After passing through the door, turn left and climb the stairs to a library. You are looking for a switch hidden on one of the bookcases - turn round as soon as you climb the stairs to see five horizontal bookcases in front of you. Go to the second bookcase from the north wall to find the switch on its west face and push it, which will open a set of bars to the east. Go through the bars to find a red reading room, where a Tome of Power is guarded by undead warrior ghosts, then head east up the stairs to another part of the library and press the switch in the north wall.

Backtrack through the library to the large hall with the altar, and go through the south-east door which has now opened. Turn right and follow the passage to the end, where you will find a wooden door leading to a room with four tables. Slay the dark bishops and disciples of D'Sparil here and then take the blue key by the south wall. Watch out for sabreclaws which will be released from two alcoves to the north.

Leave the blue key room and head north up the passage, watching out for two green chaos serpents that have been released ahead. Return to the large hall, go through the east door and head down the stairs to find a teleporter which will return you to the central courtyard, where a number of enemies have teleported in. Once they are dead, go up either of the staircases to the south and open the door between the blue key gizmos.

Go down the steps, then turn right and go down another staircase to a landing with some Lesser Runes. Go west through the wooden door, then turn left and blow up the pods ahead to kill the sabreclaws and undead warrior. Head south past a crushing ceiling and turn left to go up a curved staircase. Cross the slippery ice ahead and step through a doorway to a chamber with one or two undead warrior ghosts, then press the switch on the west wall.

Kill the weredragons which are released from an alcove to the south and backtrack to the wooden door. Go through it and head down the steps in front of you, then turn right and kill the undead warriors blocking the door ahead. Go through the door and kill the iron lich ahead of you, then go through the wall opening behind it to step into a large pool of water. Kill the weredragons guarding the area and climb up the staircase in the south-east corner, then head west along the ledge to a silver door.

Go through the door and kill the weredragon waiting behind it, then follow the passage into a rectangular room (the ceiling will lower behind you to seal you in). Prepare your weapons and artifacts, then take the green key - alcoves will open around the room to release disciples and bishops. Once they are dead, press the switch inside the western alcove along the north wall to reveal a teleporter that will send you back to the iron lich's room.

Go up the staircase and through the blue key door to the central courtyard, then go to the wide doorway east of the fountain and press the switch here to build a set of stairs up to the green key door. Go through this door and head straight forward through two sets of hanging skulls to a cage with chaos serpents, then turn left and go through the wooden door ahead.

Take the Skull Staff in front of you and kill the sabreclaws that are revealed, then turn round and go up the stairs in the south-east corner. Turn left and left again, kill the golem ghost in front of you and head through the stone door it was guarding. Follow the path through three more wooden doors to a room containing barrels, and press the switch being guarded by another golem ghost.

Backtrack to where you found the Skull Staff and go up the south-west stairs this time. Turn right and right again then go through the stone door on your left to find a switch surrounded by lethal crushers and guarded by ophidians. Press the switch and the floor by the opening in the west wall will start moving up and down; go through the opening and follow the stairs down, killing nitrogolems and undead warriors on the way.

Turn right at the bottom of the stairs to find a Bormereth waiting in the next room; kill it then head through the east wall that opens to a blue room with wendigos. Go east through this room to find another Bormereth guarding a teleporter, which will put you in a seemingly empty chamber. Open the metal wall ahead of you to return to an earlier area, kill the undead warrior and nitrogolems that are revealed ahead of you then head west to the green key door.

A platform has started moving just north of the door; ride it up then press the switch at the end of this passage to start another platform to the south. Ride this second platform up to another passage and press the switch in here, which will open the gate north of the courtyard. Head back through the green key door to find that a maulotaur and several other enemies have appeared in the area. Go through the gate north of the fountain and step into the east or west alcoves; lifts will carry you up to the top of the wall. Head north to land on the other side of the wall, then follow the path into a portal to finish the level.

As described above, taking the Skull Staff will open a wall in front of you and release two sabreclaws guarding a Quartz Flask. Approaching the flask will open another wall to reveal two nitrogolems guarding a Tome of Power, and approaching the tome will reveal an iron lich. After killing the lich, you can open the door behind it to reach the blue room mentioned above.

Secrets #2-5 must be found before teleporting out of the western area of the level, as they will become inaccessible after this point.

* The vertex count without the effect of node building is 3605.