E2M7: The Great Hall is the seventh level in the Hell's Maw episode of Heretic. 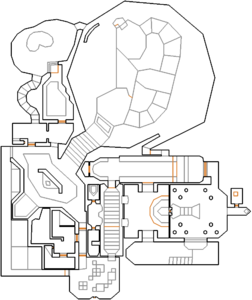 Map of The Great Hall
Letters in italics refer to marked spots on the map. Sector numbers in boldface are secrets which count toward the end-of-level tally.

Make your way down the steps taking out beasties as you go. When you get to the lower platform (do not drop down to the ground) look to the southeast and make a run at the stairs. Do not bother with the Tome of Power because there is no way back without taking major damage. If you absolutely must have it, drop down and grab it, then go around to the north and you will come to a safe spot with a weredragon unless you have not killed him already. The switch will raise a platform where the tome was making a step. Also, if you look to the north, you can see a small platform. Run to it and press the switch to lower a way back up to the start.

Head up the stairs and clear the area of beasties. Do not forget the ones behind the window beside the green door. Get the Bag of Holding, but be quick. Go through the door to the southeast. Go through the south door first. Clear the storehouse of gargoyles. When you press the switch to the south, the block with the yellow key will lower. Get the key and head back to the door to the west.

Start with the room to the right. Take out the gargoyles, including the one hiding in the alcove across the stairs, and weredragons. Get the Chaos Device and the Dragon Claw and press the switch behind the dais which will lower obligingly for you. It makes the green key accessible. Head for the alcove on the other side of the stairs. Go through the south door first and get the Map Scroll. Now go to the northern door and get the green key. Head back to the green door. When you go through the door to the north, you will be ambushed by sabreclaws. Take them out and get the blue key. Take out the beasties you can see outside. Head back to the green door. You will see an alcove open just past it. Press the switch. It will open a passage outside.

Secret 1: Make a run down the volcanic rock stairs. Get the Phoenix Rod on the heart-shaped island. (sector 106)

There is an Enchanted Shield on the steps visible to the northeast. Get it and run back up to the green door. Now head back to the big stairway. Go down the stairs and take out the beasties. As you approach the blue door, the eastern ends of the platforms on either side will begin raising and lowering providing access to the goodies up there. Ride the northern one up first. Get the Hellstaff and drop down into the narrow passage. At the end, you can see the Wings of Wrath sitting just out into the lava. Get it quickly, come back and ride the wall section that lowers back up. Go to the southern side and ride the wall section up. Wall sections to the south will open leading into and then past the dais room. Take out the sabreclaws.

Secret 2: The room with the sabreclaws is the secret. (sector 72)

Take out the disciple at the bottom of the stairs and the gargoyles you can see through the barred window. Get the Ring of Invincibility. Go back to the blue door. Take out any last gargoyles inside and press the switch. Head back to the storeroom. You will find a passage to the west open now.

Secret 3: Take out the beasties and get the goodies in there. (sector 30)

A wall section will lower leading back to the green door. Head back to the hallway with the blue door. There is one more secret to get before you go. Use the Wings of Wrath to reach the picture of the chained warrior.

Secret 4: Press the wall section to open it and get the Tome of Power. (sector 156)

Go back through the blue door, get the Mystic Urn and open the door to the north. Take out the disciple and exit the level.

On the northern platform near the blue door, sidedef 962 lacks an upper texture. The flaw causes the flat of the lower ceiling to leak over the top wall of the sidedef causing a minor visual anomaly.