E2M8: Baphomets Throne [sic] is the eighth and final map of Slaughter Until Death, featuring a boss battle with a cyberdemon. It was designed by Thomas Möller, then known as Grindcrusher, and includes "Facing The Spider" as a replacement music track. 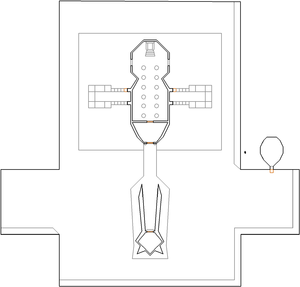 Map of Baphomets Throne
Letters in italics refer to marked spots on the map. Sector numbers in boldface are secrets which count toward the end-of-level tally.

* The vertex count without the effect of node building is 365.