E2M8: Catacombs and Other Stuff (Eye of the Beholder)

E2M8: Catacombs and Other Stuff is the eighth and final map of Eye of the Beholder. It was designed by Jon Landis and uses the music track " ". It originally received a standalone release as !WOW!.WAD ("The word you will say after playing this!"). 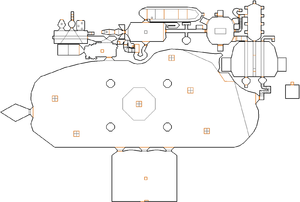 Map of Catacombs and Other Stuff
Letters in italics refer to marked spots on the map. Sector numbers in boldface are secrets which count toward the end-of-level tally.

It is very difficult, if not impossible, to obtain 100% kills on this level as there are eight cacodemons and four imps located in an area behind a door (sector 201) which is opened by a switch some distance away which only works once. In order to reach the imps, one must also go through a door (sector 205) which can only be opened once from the outside and not at all from the inside. The .txt file for this wad suggests that this area is only intended to be accessed in multiplayer.