E2M8: Courtyard of Destiny is the eighth and final map in the Hellbound episode of Masters of Chaos. It was designed by Doom_Warrior and uses the music track from Heretic's E3M3: The Confluence. 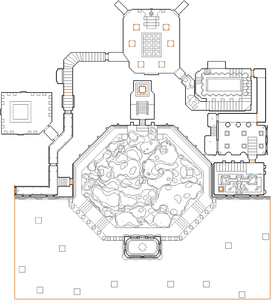 Map of Courtyard of Destiny
Letters in italics refer to marked spots on the map. Sector, thing, and linedef numbers in boldface are secrets which count toward the end-of-level tally.

Take the items in the starting room, including the Phoenix Rod and Chaos Device, then go through the door to find a large pit surrounded by a stone walkway. Follow the walkway to its ends to find a Dragon Claw and Firemace, then go through the door in the west wall to enter a long corridor. Turn right and kill one or two fire gargoyles ahead, then go forward and enter the doorway on your left to enter a room with lava. Kill the enemies here and press the switch in the west wall, then return to the corridor.

Turn left and go through the open door ahead, then keep following the corridor (watching out for disciples of D'Sparil that are released from an alcove on the left) to a room with six red columns. Slay the fire gargoyles and nitrogolem ghosts in this room, then climb the stairs and press the switch on the north wall. Kill the weredragons that are released from alcoves on either side of you, then go through the door in the south-east corner.

Follow the next corridor and go down the stairs to the bottom. Take the Silver Shield and Torch by the barrels in the north-west corner then go east through a stone door. Turn right and follow the hallway to a tall stone room, destroy the sabreclaws that rise from the floor then go through the north-west doorway. Turn left and climb the stairs, then press the switch at the top which is guarded by undead warrior ghosts. Go back to the main room and climb the steps which have raised to another stone door.

Turn right and climb the gray steps to an area with nitrogolems and weredragons. Take the Skull Staff in the south-east corner and press the switch next to it, then turn round and step into the teleporter which has opened behind you. You will be sent to the large stone pit, which now contains lava pools and has a large number of monsters teleporting in, ending with three Bormereths. Collect the items around the edges of the pit to help you fight them off, including a Ring of Invincibility.

Once all the Bormereths are killed, two to four maulotaurs will teleport in; use everything in your possession to destroy them. Killing the maulotaurs that appear on the east side of the arena will open the two exit doors in the north wall; go through these doors and climb the steps to the exit teleporter to finish the episode.

After going through the door west of the pit, turn left to find another Dragon Claw guarded by undead warriors.

* The vertex count without the effect of node building is 5039.