E2M8: During the Ceremony is the eighth and final map in the Mount Suffering episode of Heretic Upstart Mapping Project. It was designed by BeeWen and uses the music track "". 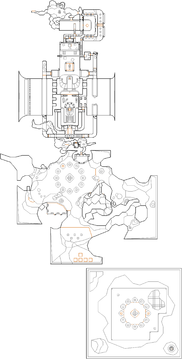 Map of During the Ceremony
Letters in italics refer to marked spots on the map. Sector, thing, and linedef numbers in boldface are secrets which count toward the end-of-level tally.

Shoot the switch in front of you to get out of the cage, then go up the steps and walk between two more cages containing golems to find a coffin with another switch on it; approaching the coffin will open two alcoves behind you containing fire gargoyles and golems, as well as undead warriors on bringest them oneth (BTO) skill level or higher. After pressing the switch on the coffin, run north across two crates next to the cage you started in to reach a small passage and go through the door in front of you before it shuts, then head down the steps and press another switch at the bottom; the walls around you will open, revealing a pool of water below containing some fire gargoyles. Head past the gargoyles into a tunnel and go round the corner to confront a golem ghost (or weredragon on thou art a smite-meister (TAASM)) overlooking a water pool that has pods in it; you should destroy these along with the enemies atop the nearby waterfall before continuing. Run north-east to land on a stepped rock then north-west to reach a ledge with one or two ophidians; from here you can follow another tunnel east past a fire gargoyle (or disciple of D'Sparil on BTO or higher), then run south to land on the pillars directly under the waterfall so you can climb to the top.

Turn right to find a Quartz Flask and golem ghost then use the lift behind them to go up to a thin ledge above the first water area. Turn left and head towards a platform with two sabreclaws (and two undead warriors on BTO or higher) then press the blue trident on the east wall to lower it and reveal Gauntlets of the Necromancer guarded by gargoyles, as well as nitrogolems on BTO or lower or ophidians on TAASM. Step on the plinth with the Gauntlets to lower the surrounding walls and reveal more enemies, then enter any of the alcoves in the north or south walls; the floors of the alcoves will lower and drop you into a hallway with sabreclaws. Go round to the east side of the hallway and press the switch next to the wide door here to open it and reveal some undead warriors, press the blue switch on the east wall then go to the north side of the hallway where a door has opened revealing a golem ghost (or weredragon on TAASM) guarding a Bag of Holding. Opposite the Bag is a lift; ride it up to a Dragon Claw and press the switch here to open a door that you can see through the window.

Head back to the switch between the two wide doors and use the lift opposite it to go back up to the room that held the Gauntlets. Go through the door you just opened and head round a corner to find another switch, which will lower to reveal a passage behind it, then jump over the gap and look left to find an ophidian in front of a door; behind this door are two undead warriors guarding the yellow key.

Leave the room and turn left, then go round the corner to find a one-way door leading back to the starting area. Go back to the coffin and enter the alcove to the east to find a yellow key door, open it and push past an iron lich to reach a broken bridge; kill the gargoyles and ophidians approaching from the other side, then approach the gap and look down to see some pods that can be blown up to kill some golems and weredragons which emerge from a nearby alcove. Go into the alcove and press the wooden south wall to lower a lift with another lich, then ride the lift up and turn right at the top to find a yellow path that leads round to a set of stairs. Go down the stairs and walk round the skull pillar in front of you to find a Phoenix Rod and a Tome of Power, then walk forward to a switch that will lower the red pillar in front of you holding the blue key.

With the blue key, take the Ethereal Crossbow behind it if you have not already done so then turn left and enter the alcove in front of you to find a blue key door. Go through the door and turn left to find an intact bridge and run across it, watching out for disciples and undead warriors attacking from either side, and walk through the open door at the end which has a golem hiding behind it. Drop into the water ahead of you then turn round to see some thin ledges running along the wall that lead to a Torch; after reaching it, kill the weredragon blocking your path then run across to its platform and follow the tunnel to another water pool containing one or two iron liches. Climb up the steps along the north wall and kill one or two ophidians above, then run south to a ledge with one or two Energy Orbs; the back wall will lower and reveal fire gargoyles along with a Morph Ovum, so kill them then run north to reach a platform with a brazier before running north-east to get to the ophidians' ledge.

Go forward and destroy a golem on your left, then open the door to your right and kill one or two disciples hiding behind it. To your left is a window which overlooks a tall cavern; dispose of the gargoyles and undead warrior ghost on the ledges ahead then run east to land on a tall pillar in the middle of the cavern before walking north-east to reach the warriors' ledge. Lower the lift between the two serpent torches here and ride it up to the top, then go up the steps and look for a switch between the lights in the left-hand wall that will raise a bridge behind you. Cross the bridge and walk towards a blue switch on the other side; before you reach it you will be teleported to a large water area with a ring of pillars, and if you drop over the waterfall in front of you then a maulotaur will teleport to the pillar area.

As soon as you teleport, turn round and climb up the steps behind you then head south through the water (which flows west) until you pass a root-covered rock and reach a wall opening that has a sabreclaw in it. Head up the steps to a Torch and run across to the large rock you just passed, then run east to land on the next level of the river and follow it until you can turn right to find a tunnel entrance. Enter the tunnel to find a maulotaur and one or more nitrogolems for you, then follow the path until you get back outside and see another wall opening on your right with a weredragon in it. Follow the passage past two nitrogolems guarding stacks of Mace Spheres and possibly a Firemace, then turn left to see an undead warrior ghost on a ledge; you need to get to the switch here. Continue following the passage until you get back outside, then turn right and carefully follow the narrow path as it leads up some steps. At the end of the path, enter the tunnel on your right to reach the switch you saw earlier.

Drop down to the floor below and turn right to go back outside; ahead is a weredragon on a ledge with two stacks of Mace Spheres, and pressing the switch has lowered the wall behind this ledge allowing you to go past it. Follow the gray ledge west past a brazier to find a number of small pillars, run along them then continue following the path north until you see some small gray ledges that lead down to a teleporter which will return you to the blue switch you tried to reach earlier. Press the switch and you will see a skull pillar with a teleporter lower through the fence in front of you. Drop to the floor below and go down the red steps to reach the teleporter (you can ignore the maulotaur that teleports here if you wish), which will send you to a second ring of pillars; when you step into the ring D'Sparil will rise from a hole in the center. You can fight D'Sparil if you wish, but it is not mandatory; step on the island in the center of the ring and a floor inside the building in the south-east corner will lower to reveal a switch. Shoot the switch to reveal two teleporters - the west teleporter exits the level, while the east teleporter leads back to the first ring of pillars.

After dropping into the water area north of the start, look in the south-east corner to find a Ring of Invulnerability.

After riding the lift up that leads to the switch inside the light wall, head east to a door with an iron lich behind it. Follow the tunnel to an open door leading to the other side of the broken bridge on the east side of the level; you will find an Enchanted Shield here.

Pressing the switch in the area with the first ring of pillars lowers a brown wall allowing you to jump across to a gray ledge with a brazier. Immediately walk south to step down to a Ring of Invulnerability; this action will open a wall just behind you revealing a chamber with gargoyles and weredragons. There is a switch in the south-west corner of this chamber that will allow two or four iron liches to teleport into the ring when pressed.

* The vertex count without the effect of node building is 4203.