E2M8: Evil Refinery is the final map of The Classic Episode. It was designed by Nick Baker with Travers Dunne and uses the music track "The Demons from Adrian's Pen". 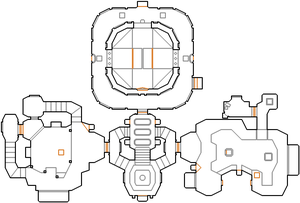 Map of Evil Refinery
Letters in italics refer to marked spots on the map. Sector, thing, and linedef numbers in boldface are secrets which count toward the end-of-level tally.

If you descend down you will see four teleporters. The white ones do not work in this area but serve as destination points. The red ones work. They deposit to the respective area behind red door at west and east. You may use any of the red teleporters but it is recommended if you use the eastern one first. In the outside place, get to the other side of it by walking on the border. Have your first key, the blue skull and do not forget to flip the lever as it unlocks the northern room which you will use a bit later. Get back through the teleporter (first, fall down into the pit and use another teleporter to get out) to return to the starting room.

This time, use the western red teleporter. In the next area, head left and up the stairs. Open the UAC door requiring blue skullkey. Get the second key - the yellow one. Backtrack to the teleporter leading to the starting place.

Reuse the eastern teleporter to get to the eastern area again. And this time use the northern pit at the bottom to get into a room and open a UAC door which requires the yellow key (though this is not marked as if requiring the right key, no yellow bars). In a small cargo room, take the last key on the crate, the red.

Backtrack to the starting area via the teleporter or use the red door as you have the red key.

In the starting area, use the northern door requiring the red key. Note, if the door closes you will not be able to open it from that side. Go down the corridor around and in the very north area, flip the lever to unlock the area in the middle. Enter that area and flip another lever south. This one will unlock the button east in the corridor as long as unleash a crowd of cacodemons. Press this switch to unlock almost the same switch in opposite site. Go to the western side of the corridor and press that switch. This will unlock an alcove in the north of the corridor containing BFG9000 and ammo for it. It also unleashes several demons and the cyberdemon itself. You may kill anyone you wish, however your main objective is to kill the cyberdemon to beat this level.

The data was last verified in its entirety on February 24, 2022.

The layout was designed by Travers Dunne and it was originally built as a Doom II level. Nick Baker later altered the texture scheme to use resources of the first Doom, then he added more enemies and an exit area. The level was originally released as a standalone WAD titled Doom Classic 4: Evil Refinery, first uploaded by Nick to the idgames archive on November 15, 1998. A v1.1 release followed on December 3, 1998 with fixes: