E2M8: Hell's Maw is the eighth and final map of episode 2 of Heretic Treasure Chest. It was designed by Jason Allison (rf`) and uses the music track "Arpo" from Heretic, created by Kevin Schilder. 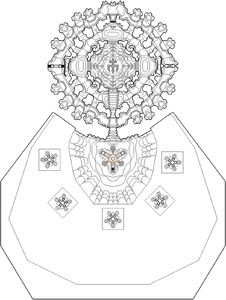 Map of Hell's Maw
Letters in italics refer to marked spots on the map. Sector, thing, and linedef numbers in boldface are secrets which count toward the end-of-level tally.

Take the Ethereal Crossbow then turn right and follow the passage past some gargoyles and golems to a switch and a Bag of Holding, which are guarded by an undead warrior. Press the switch then go back the way you came, following the tunnel in a clockwise direction past more enemies until you reach a second switch on the east side, which will lower several walls leading to the inner ring revealing ophidians and disciples of D'Sparil. Enter the inner ring and go to its north side to find a third switch, which will lower a wall behind you revealing an arena with four maulotaurs, or eight on hard skill levels.

Once all the maulotaurs are killed, a wall at the south end of the arena will lower to reveal another switch. Press it then go down the staircase that forms in front of you to find a blue teleporter that you can step on to finish the episode.

Numerous pickups can be found by searching the alcoves on either side of the outer ring.

* The vertex count without the effect of node building is 4539.