E2M8: The Portals of Chaos (Heretic)

E2M8: The Portals of Chaos is the eighth and final level in the Hell's Maw episode of Heretic. It uses the music track "Arpo", created by Kevin Schilder. 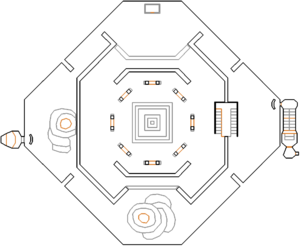 Map of The Portals of Chaos
Letters in italics refer to marked spots on the map. Sector, thing, and linedef numbers in boldface are secrets which count toward the end-of-level tally.

Press the switch in front of you to be carried up to an open area with fire gargoyles. Take any items you need here, including a Silver Shield, then head east through a gap in the wall and push past some nitrogolems to the east side of the map where some weredragons are waiting. Go up the steps by the west wall and dispose of any waiting fire gargoyles, take the Mystic Urn here (on bringest them oneth (BTO) skill level or lower) then go down another set of steps to reach the portals where the maulotaurs are waiting.

The number of maulotaurs varies with skill level - one on thou-needeth a wet nurse and yellowbellies-r-us, two on BTO, or three on thou art a smite-meister and black plague possesses thee. Keep strafing to avoid the maulotaur's attacks, especially their floor-hugging lines of fire, and use the Ring of Invulnerability in the middle of the arena to help you. Once all the maulotaurs are killed, the wooden barriers blocking the four corner portals will lower - enter any of these portals to finish the episode.

The north, east, south and west portals in the center of the map have a Phoenix Rod, a Morph Ovum, a Hellstaff and a Tome of Power inside them respectively. Entering these portals will send you to the opposite side of the map.

* The vertex count without the effect of node building is 444.