E2M8: The Sulacco is the eighth and final map of Aliens TC, and features a boss battle with the Alien Queen. It was designed by Justin Fisher.

The map's subtitle on the intermission screen is Survive!. 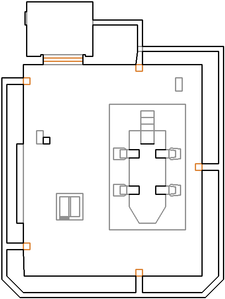 Map of The Sulacco
Letters in italics refer to marked spots on the map. Sector, thing, and linedef numbers in boldface are secrets which count toward the end-of-level tally.

According to Justin Fisher, this level is one of two extreme cases where he exceeded the two-sided linedef limit in Doom v1.2. When viewed from a distance, the cargo bay area can induce a large HOM.

In the Ultimate Doom version, killing the Queen does not end the game due to the changes in tag 666's behavior. Quasar's "v2.0" package fixed this by copying the new spider mastermind sprites and frames to the cyberdemon.

* The vertex count without the effect of node building is 180.