E2M8: Vault is the final map of The Shores of Hell in Doom the Way id Did. It features a boss battle with the Cyberdemon. It was designed by Michael Fraize (Marcaek) and Sarah Mancuso (esselfortium) in the style of Sandy Petersen. The par time defined in the DEHACKED lump is 2:00. 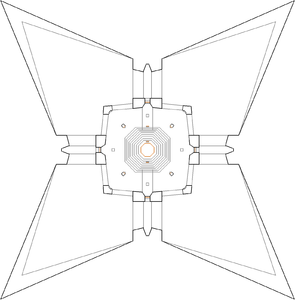 Map of Vault
Letters in italics refer to marked spots on the map. Sector, thing, and linedef numbers in boldface are secrets which count toward the end-of-level tally.

Gather supplies and enter the door. Clear out the enemies initially present, and then press all the side switches to lower some extra supplies. Now press the switch at the north end of the central column to lower it a bit. Then press the switch on the south end, and finally the north end again. The last switch you press will fully lower the column, as well as the cyberdemon. It will also expand the arena by lowering the walls and revealing lost souls at the four corners. The cyberdemon will first teleport to one of these corners, so use caution if you are heading into one of these. And take note as the blood still damages you. Kill the cyberdemon to finish up the second episode.

* The vertex count without the effect of node building is 304.