E2M9: Arena Of Punishment is the secret map of Slaughter Until Death. It was designed by Thomas Möller, then known as Grindcrusher, and includes "Sign Of Evil" as a replacement music track.

This level can be accessed from E2M5: Mutilated Corpses; completing it takes the player to E2M6: Damned Bastards. 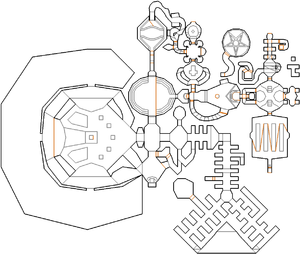 Map of Arena of Punishment
Letters in italics refer to marked spots on the map. Sector numbers in boldface are secrets which count toward the end-of-level tally.

The rockets in the secret pentagram cannot be grabbed.

100% kills is not possible on this map as there are 2 demons in the outside area to the west which are deaf and cannot see the player, so never move and cannot be killed.