E2M9: Charnel House is the ninth, and first secret, map in the Hellbound episode of Masters of Chaos. It can be accessed from E2M5: Badlands.

It was designed by Doom_Warrior and uses the Hexen music track "Borkesis". 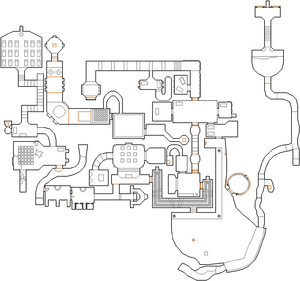 Map of Charnel House
Letters in italics refer to marked spots on the map. Sector, thing, and linedef numbers in boldface are secrets which count toward the end-of-level tally.

Take the Ethereal Crossbow on your left and head northwest past the building in front of you. Follow the path past a door with green key gizmos to a switch guarded by dark bishops and press it, then backtrack to the start point to find that the door to the building has opened. Slay the waiting reivers and head west along the hallway, rounding the corner to a door with a chained man which you need to go through.

Follow the passage past a lift to a room containing a Dragon Claw and the yellow key. Slay the nitrogolems here (plus reivers on medium and hard skill levels) and take the key, which will open a wall to the east and release green chaos serpents. Use the weapon you just collected to slay them.

Backtrack to the building entrance and head east along the hallway this time, going around the corner to find a wooden door. Open it to find a room with gargoyles; reivers and undead warrior ghosts will also be revealed behind the west wall when you enter the room. Collect the Gauntlets of the Necromancer in the corner if you need them, then go through the door flanked by yellow key gizmos.

You will find a hallway containing Timebombs of the Ancients, as well as two golems and a nitrogolem; the hallway also has two crushing ceilings which can damage the monsters for you. Head through the hallway to another door, behind which is a large hall - five nightmares are present in this hall and the adjoining chambers, so be ready to shoot at a moment's notice. Head north through another door and follow the passage around the corner.

There are several more crushers ahead; move carefully through them and go round the corner to find three ophidians on easy skill levels, or an iron lich on medium and hard. Defeat the enemies then jump up to the trident symbol on the wall behind them to be teleported into a room with a crusher trap - quickly head forward and look for a small opening in the wall on your right, then crouch down to get inside it before you get squished.

Follow the crawlspace to a room with a grated ceiling. Head up the slope and destroy the iron lich and fire gargoyles ahead, then follow the passage to a silver door between brown columns. Open the door and step into the teleporter behind it, which will send you to a dark chamber with graves. Head forward to a wooden door and take the Jade Wand in front of it, causing several reivers to appear - slay them using your new weapon and press the switch that has been revealed in the north wall to open the door.

Head south up the staircase and slay the undead warrior ghosts waiting at the top, then turn left and follow the tunnel to a larger room that contains three ophidians on easy skill levels; on medium and hard two of them will be replaced with iron liches. Step on the platform in the southeast corner to be taken down to a water stream, then head southwest to find a small opening in the wall. Squeeze through it to a room with three nooks, and take the green key from the middle nook.

With the green key, press the switch in the east nook to open a door leading back to the yellow key room. From here, backtrack to the starting area and go northeast to a door you passed earlier that has green key gizmos. Open the door and slay the chaos demons waiting behind it, then press the switch on the northeast wall. Leave the room and turn left, heading forward into a river. Go north into a tunnel and follow it through a set of bars that opened when you pressed the earlier switch. Kill the fire gargoyle waiting ahead and drop into a fast-flowing stream which will carry you to a cavern with three weredragons. Kill them and head north up the stairs - the wall in front of you will open to reveal an undead warrior ghost. Kill this final enemy and step into the portal behind it to proceed to E2M6: Abyss.

* The vertex count without the effect of node building is 2409.