E2M9: Descent into Darkness is the ninth and secret map of The Collider's New Clothes episode in Return to Hadron. It was designed by Matt Powell (cannonball) and uses the music track "Adagio for Strings and Organ," originally composed by Remo Giazotto and arranged by Lee Jackson for Rise of the Triad. 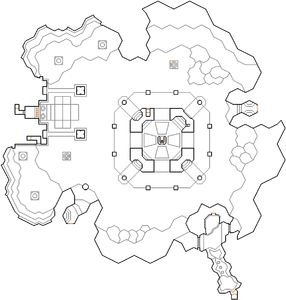 Map of Descent into Darkness
Letters in italics refer to marked spots on the map. Sector numbers in boldface are secrets which count toward the end-of-level tally.

* The vertex count without the effect of node building is 1325.