E2M9: Fortress of Mystery is the secret map of The Shores of Hell in Doom, which can be accessed from E2M5: Command Center. It was designed by Sandy Petersen and uses the music track "Untitled." The par time is 2:50.

Like many secret maps, this is something of a concept level, featuring a room full of barons and a room full of cacodemons and not much else. On the other hand, if you survive, you can leave carrying every possible weapon (excluding the BFG9000 which does not appear until the next episode). Completing this level takes the player to E2M6: Halls of the Damned.

This map also formed the basis of the final level of the Atari Jaguar, 3DO, Sega 32X and Game Boy Advance versions of Doom, replacing E3M8: Dis as the end of Inferno. In the Sony PlayStation and Sega Saturn versions, as in the PC version, it is the second secret level in the game, though it is accessed from MAP15: Spawning Vats instead of E2M5: Command Center. Completing it takes the player to MAP16: Hell Gate in the PlayStation version. 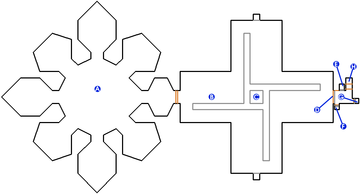 Map of Fortress of Mystery 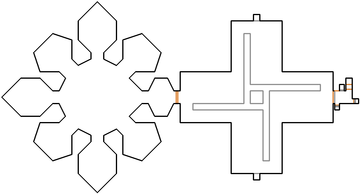 Map of Fortress of Mystery
Letters in italics refer to marked spots on the map. Sector, thing, and linedef numbers in boldface are secrets which count toward the end-of-level tally.

When the level starts you will appear in the center of the "star"-shaped room (A), facing north, and immediately be approached by four barons of Hell located in the northeast, northwest, southeast and southwest "arms". Go through the door in the eastern "arm". The next area (B) holds ten cacodemons. Head to the eastern end of this "+"-shaped room. There are two lion-faced reliefs on the wall (D). Open the wall between them to reveal the final area. Press the skull switch to your immediate left to get the blue key (E), then open the blue door to get the red key (F). Open the red door to get the yellow key (G), and lastly open the yellow door to reveal the exit teleporter (H).

At the start point, there is a blue armor directly behind you.

The "+" room has a soul sphere in the exact center (C), in addition to six large ammo pickups and four medikits.

The "star" room is easiest to complete if you have equipment left over from previous levels: find a safe spot and take the barons out with your most powerful weapon. Once they've been taken care of, look in each of the "arms" to find (counterclockwise from northeast) a rocket launcher, a plasma gun, a chaingun, a backpack, a computer map, a chainsaw, and a shotgun.

A much safer option is to turn the aggression of the barons and cacodemons against them. If you immediately start running in circles around the barons, you will shepherd them into a closely spaced group. Now run into the "+" room and do the same with the cacodemons; do not fire as this gives them time to zero in on you. Then run back to the baron room, stand between the two groups until they have damaged each other (accepting a blast or three yourself), and then run into one of the corners. At this point, you can expect to be mostly left alone as the cacodemons and barons will have hit each other and start a huge infighting sequence. You can sit back and watch, then finish off one or two creatures which have been badly wounded. You'll probably regain any health lost and more by cleaning out the "+" room, and won't have lost much ammo (if any). The fact that there are preexisting corpses of each monster type in the other monster's room suggests that this was the designer's intended strategy.

The yellow key can be grabbed through the red door without opening it.

Similarly, the red key can be grabbed through the blue door, or through the wall to the west.

One energy cell (Thing 37) has no flags set for any of the difficulty classes, so it does not actually appear in the level.

Sidedefs 135, 138, and 158 are missing their upper textures. This has no actual effect on rendering because each key chamber cannot be entered until the back of the door has risen beyond the player's field of view. (Even with the no-clipping cheat, the resulting anomalies are fairly narrow in the latter two cases; the first case creates a HOM over the entire door.)

In a straight speedrun, the yellow key grab is essential for a world-class time. Marijo "Sedlo" Sedlic credits Thomas Zajic (GoDfAtHeR) with the original discovery. [1] If you choose to open all the doors, you may need the soul sphere or the blue armor first, as you will expose yourself to many more projectile attacks thereby. You can also shave a few seconds [2] by approaching each key obliquely, allowing you to rebound off the door jamb.

A fast time in NM speed may actually be easier than in UV speed, because the two fast cacodemons in the rear shoot at you a lot instead of moving into the center of the room. [3] [4] Given this, and given the completely straight path between the start point and the secret door, 0:06 is arguably an optimal time.

UV max runs of this map rely heavily on infighting, which (here as elsewhere) requires the player to set up one situation while another is still in progress. The consensus at Compet-n is apparently:

Although the chaingun has a higher damage rate than the shotgun, its ammo is more limited [7]; the bullet boxes are also out of the way of the main route, whereas the cacodemons seem to enter the crossfire sooner if one approaches the secret door promptly. [8] Luck plays a role in achieving a world-class time; one must hope that the barons stay close enough together to take a lot of blast damage [9], and that the infighting has sufficient overall effect that you don't run out of ammo at the end. [10]

In the UV -fast style, the opening gambit from UV max does not work well due to the barons' increased attack frequency, nor is it nearly so safe to stand between the barons and cacodemons for an extended time. Instead, pick up the shotgun and enter the cacodemon room, shooting a few monsters while collecting ammo, and proceed to the secret area. Go back for the other weapons only after opening all the doors. [11] This allows enough time for infighting to begin, which of course damages the monsters more quickly once it has. Also, while in the exit area, sidestep the incoming projectiles more fastidiously than at normal speed. [12]

Early Tyson submissions allowed some infighting to proceed and then used the chainsaw exclusively, the total time determined by how long one waited to start hitting barons from behind. It is faster, however, to go straight to the exit and pick up the keys in several sorties, circlestrafing with the pistol in between. [13] The current record holder collects all the keys at once, then herds the monsters into a small area by staying near the western door [14]; this is more dangerous, but faster, since it increases the frequency of monster-monster targeting. An important footwork consideration while chainsawing each cacodemon is to use it as a shield against incoming fire.

UV pacifist is indistinguishable from UV speed on this map, as there is no good reason to attack such large monsters with a pistol.

* The vertex count without the effect of node building is 150.

Level designer Petersen considers this map his best Doom level design, calling it "a little gem of creature and unit balancing".[1] Petersen also explains that this level was the first to use infighting as an integral gameplay concept.[2]