E2M9: Nebulous Origins is the secret map of The Shores of Hell in Doom the Way id Did. It was designed by Trevor Primmett (iori) in the style of Sandy Petersen and uses the music track "The End of DOOM". It can be accessed from E2M5: Deimos Command. Finishing this map takes the player to E2M6: Foundry. The par time defined in the DEHACKED lump is 3:30. 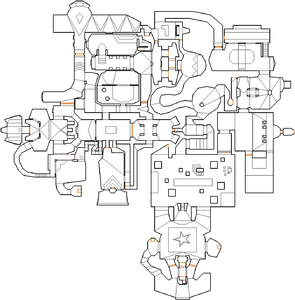 Map of Nebulous Origins
Letters in italics refer to marked spots on the map. Sector, thing, and linedef numbers in boldface are secrets which count toward the end-of-level tally.

Open the door. In the next room take a sharp right heading southwest into a curvy hall. You will find a switch at the very end, press it. Now go back to the room and you will find a few extra passages to take. Now enter the door to the north. You will see a blue door to the north, and a hall slightly east of that. Take this hall and when you can go right, do so. You will see two switches, press the one that is not lit to lower the other platform as a lift. Take this down to the water and find the switch at the end here. Now go back to the room and there should be a third path open. Follow this path to the blue keycard. Go back to the hallway east of the blue door leading north and go all the way to the end of the hall to find a second blue door.

Take this one and follow the linear path to a switch. Now backtrack and you will see a new area with a structure containing an inverted cross. Behind this structure is the yellow skull key. Enter the northern door here, and you will find a place with nukage. Head east through the nukage and behind the wall to find a radiation suit. Now look to the southeast wall in the nukage and you will see a slightly opened wall. Open this wall up, and proceed through the nukage tunnel. When you reach the room with the column get out of the nukage and follow the path to a switch. When you press it, a shack with a baron of Hell opens, but also a passageway south of where he is at will also open. Now backtrack to where you saw the first radiation suit (you may need to grab another one along the way), and take the tunnel to the north to a yellow door. Enter this door, and climb up the stairs here to a room with a switch on the wall. Press it, then head south. The shack with the baron will be open along with a passage to the south.

Go through this passage and you will see the exit door across the blood. You cannot reach it yet because you do not have the red key. Do not fall in the blood here as you cannot escape if you do. Instead, head southwest and press the switch to reveal the cargo area. Here, if you pressed the switch in the northeastern part of the map, the southern portion of this place will be revealed. Go all the way south here, and turn west and go up the stairs to a teleporter. Then take the lift up to a switch. Go back in the teleporter to appear in the middle of a star-shaped floor, with the red skull key directly in front of you. Grab it and return to the red door. Open and follow the path to the exit, making sure not to fall in the blood.

After pressing the switch at the end of the curvy hall near the beginning, a room opens up revealing an armor.

* The vertex count without the effect of node building is 1514.