E2M9: Praevus Smeltery is the second map in episode The Badlands of HUMP mini. It was designed by riderr3 and uses the music track "". 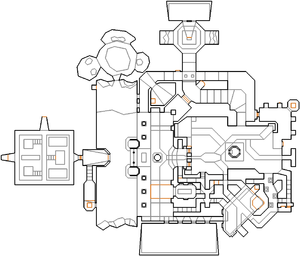 Map of Praevus Smeltery
Letters in italics refer to marked spots on the map. Sector, thing, and linedef numbers in boldface are secrets which count toward the end-of-level tally.

As soon as the level starts, turn round to see a Quartz Flask behind you; next to it is a staircase with an Ethereal Crossbow leading down to a dark passage. Follow the passage round to a brightly-lit junction and take the north-east path to find a golem guarding a switch that will lower a lift; ride this lift up and run across the gap in front of you then follow the yellow path until you drop into an area containing the green key. After taking the key, step into the teleporter next to it then go up the steps in front of you to find one or two undead warrior ghosts guarding a blue key door and a switch - after pressing the switch, look through the gate in front of you to see that a gray bridge has risen which you will need to cross later.

Go back to the teleporter to return to the green key room then run south over another small gap to a ledge with one or two nitrogolems on it, which you can follow round to four platforms that have metal crushers above them; make sure to kill any fire gargoyles and other enemies blocking your path before you try to run past the crushers. You will enter an open area with lava channels running through it - head west towards two stone doors and go through the right-hand door, then follow the red path you are standing on round the corner to another stone door and open it to confront one or two fire gargoyles as well as any weredragons and sabreclaws lurking in the passage. Head north down some steps and press the switch at the bottom to raise two metal pillars in front of you that you will need later.

You must now return to the starting point and retrace your steps to the ledge overlooking the green key room; this time, instead of dropping down to where the key was located, run south-west so that you land on a second ledge below then enter a gray tunnel and follow it west until you can run across to a green ledge west of the starting point. Follow the ledge north across the gray bridge you raised earlier into another tunnel and go round the corner to a silver door, then press the switch next to the door to open it and reveal one to three disciples of D'Sparil. Step across the two pillars you raised earlier and follow the path past some nitrogolems to a green key door, open it and go round the corner to find yourself overlooking the lava channel area. Press the switch here then drop down to the floor below and go inside the sandstone tower in the center of the room, which has opened to reveal the blue key along with Wings of Wrath.

Return to the green key area and step into the teleporter here again, then go up the steps and open the blue key door on your left to find a square room with blue walls. Push past some nitrogolem ghosts to reach the middle of the room then go up the steps here to find a Silver Shield and other pickups being guarded by one or two fire gargoyles; the ceiling will raise and reveal more fire gargoyles along with golems and one or two disciples. You can now slide across the ice to an alcove on the north side of the room, where one or two weredragons are guarding the blue exit switch.

A Firemace can spawn in the following locations:

As soon as the level starts, enter the room on your right to find a Silver Shield guarded by golems then head north-west across the lava to reach a Dragon Claw.

From the starting point, head north over the lava then continue north to a stone door. After passing through it, turn right and climb the steps to an Ethereal Crossbow then head south to get on a ledge overlooking the lava channel area where you can collect a Phoenix Rod. There is another Ethereal Crossbow just below this point, as well as an Enchanted Shield and another Dragon Claw in opposite corners of the room.

The data was last verified in its entirety on January 7, 2022.