E2M9: The Glacier is the secret map in Hell's Maw episode of Heretic, and can be accessed from E2M4. 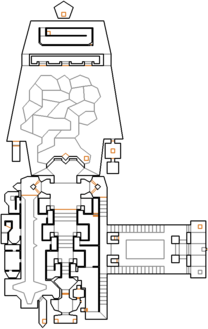 Map of The Glacier
Letters in italics refer to marked spots on the map. Sector, thing, and linedef numbers in boldface are secrets which count toward the end-of-level tally.

Head down the stairs taking out beasties. You can detonate the pods to help you but be careful. To the left and right of the stained glass windows are crevices that lead to the next part of the level. The pods here regenerate constantly. It is probably best to start on the east side. Take out all the gargoyles and get the secret before heading up the glacier.

Head up the glacier. From here you can get back to the upper level via the ledges or the teleporter. When you grab the yellow key, passages east and west of secret 1 will open. Head for the openings north of the glacier. Take out the undead warrior and press the switch in the southeast corner. A floor section will lower in the northwest corner. Take out the weredragons and go through the teleporter which will teleport you to secret 6, consisting of the isolated pentagonal room in the far north of the map.

You now have the yellow key but do not use it yet. Go back to the glacier and use the Wings of Wrath to reach the window ledge with an Inferno Orb and Greater Runes.

This area is full of weredragons. The green key is in the middle room to the west. When you grab it, a wall section will open containing more weredragons. At the southern end of the room, there is a barred cell with a disciple. Take him out (there is no way in from here). Get the time bombs and the Chaos Device and head for the green door. Go through the door and head south. Take out any gargoyles that may come at you from the room to the east but do not go down there yet. When you round the bend and head north, a wall section will open containing an iron lich. Take him out.

To the left of the room with the lich is an alcove with an Enchanted Shield. At the back of the area with the lich, there is an undead warrior ghost and a Mystic Urn.

Now head back to that big room to the east in the green door area. Go down the stairs and take out all the disciples you can through the upper barred windows to the east and the cell behind the blue key. Before going any further, head for the black iron pillar at the northwest corner of the lava pool. Press the wall section between the two skull torches to reveal a teleporter.

If you go through the second door with the skeletal motif, you will end up back in the southeast corner of the glacier room. Instead, go back through the teleporter. You are now inside the other iron pillar in the southwest corner of the large room in the green door area. Press the wall section ahead to get out. Get the blue key and head for the blue door. Take out the disciples and push the switch. Kill yet the disciple in the room to the left. The door is on a timer; if it closes, you will have to press the switch again. Stepping inside will cause a wall section across from the blue door to open. You are now presented with three teleporters. The one in the small room will end the level so do not use it yet. Go through the southeastern teleporter. This will lead to the upper barred cell in the lava pool room.

Press the switch. This will lower the cell floors. Ride the northern one up and go through the teleporter. This takes you back to the two teleporters. Go through the southwestern one.

Go back into the small room and exit the level. This will take you to E2M5: The Catacombs.

If the Firemace has appeared, you can have it at one of four different locations. In order of appearance, the places are:

If the weapon did not appear, the next chance to get it is on E2M6.