E2M9: The Temple Of The Elements (Heretic Treasure Chest)

E2M9: The Temple Of The Elements is the ninth and secret map of episode 2 of Heretic Treasure Chest. It was designed by Fenris Wolf and uses the music track "Olkin" from Heretic, created by Kevin Schilder. 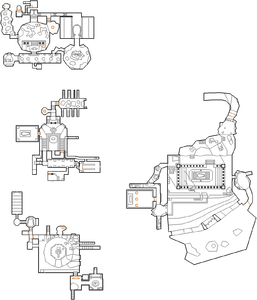 Map of The Temple Of The Elements
Letters in italics refer to marked spots on the map. Sector, thing, and linedef numbers in boldface are secrets which count toward the end-of-level tally.

Press the switch in front of you to climb out of the sarcophagus then go down the steps on your left and turn left to enter a sandstone building ahead of you. Follow the passage past a couple of golems until you step through a broken wall then turn left to find two nitrogolems next to an opening in the right-hand wall. Go through this opening to enter a chamber with three teleporter pads - these lead to the rest of the level and all three keys.

Step on the red (middle) teleporter to enter a short passage with a Hellstaff, kill two gargoyles waiting in the next chamber then approach the brick wall in the south-west corner to lower it and reveal a staircase. Go down the stairs and turn left at the junction, then head forward into a torch-lined tunnel that leads to a wide hall - do not stand still in this area as there are weredragons lurking in the dark areas behind the windows. Head south into the lava, go round to the south-east wall to find a Crystal Geode and two Energy Orbs then look north-west to see a switch guarded by gargoyles. Press the switch to open the north-west wall and enter the tunnel behind it with crystal vials. Follow the passage west, killing the disciples of D'Sparil ahead, then go up the steps on your right to find the yellow key. With the key, step west to drop down to a metal column with a switch then head east over some steps to a teleporter that will take you back to the start of this area - from here you can return to the torch-lined passage, heading south at the T-junction to a door that lowers automatically, revealing one or two weredragons guarding a Silver Shield and a teleporter back to the starting point.

Return to the room with three teleporters then step on the green (north) teleporter and take the Ethereal Crossbow in front of you. Go down the steps and head west to a chamber with two undead warriors and approach the green wall to the north, which will lower to reveal a large room with a tower surrounded by sludge - the green key is located on this tower. Push past some gargoyles and go to the north-west corner of the room to find a small chamber with Claw Orbs, then press the switch in this chamber to lower a lift next to it. Ride the lift up, slay the undead warriors and gargoyles ahead then open a silver door on your right (requiring the yellow key) to find another switch; this will raise a bridge leading to the green key tower so you can collect it along with a Bag of Holding and other supplies. Go back to the lift and ride it up again, then go north and west down some steps to a hall with five crushers - time your run past the crushers to reach a switch, press it then go through the crushers again and go up the steps to find that a teleporter leading back to the starting point has lowered.

Return to the room with three teleporters then step on the blue (south) teleporter to arrive in a tunnel with a Dragon Claw. Enter the large room in front of you then climb the staircase on the west side and follow the passage to a hallway lined with braziers. Push past the nitrogolems and fire gargoyles here then go up some steps to find a narrow passage with two undead warriors guarding a switch; when you enter the passage the walls on either side will drop to reveal more warriors (or ophidians on medium and hard skill levels). Press the switch then backtrack to the large room and head up the east staircase at this time to find a door requiring the green key; open it and follow the passage to a water pool with the blue key. With the key, go back downstairs and climb up either set of steps by the north wall then continue north to a room with several moving platforms. Step carefully across the platforms (the water below is damaging) to a switch on the north wall, press it then head back to the steps to find that a teleporter leading back to the starting point has lowered.

Return to the room with three teleporters and step on the red teleporter again, but as you go down the first staircase turn right to find a blue key door with an iron lich behind it. Destroy the lich and press the switch behind it, then drop into the lava cavern to the south and head west through a now-open door to find a second room with moving platforms over lava. Head north across the platforms to a ledge with two weredragons (or another lich on hard skill levels) and press the switch behind them, then step into the teleporter that lowers behind you. You will be placed in front of a dark tunnel near the starting point - enter the tunnel to finish the level.

From the start, head south-west through a broken section of wall then turn right and follow the path to a Tome of Power.

* The vertex count without the effect of node building is 3235.