E2M9 is the ninth and secret map of the second episode of Heroes. It was originally designed by James Atchison (Professor Doom) as PRODOOM.WAD or PVBDETH.WAD, then modified by Albert Dewey for the compilation. It uses the music track " ". 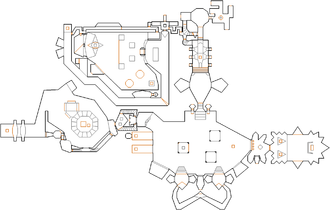 As two secrets (see above) are too small, the maximum achievable secret percentage on this map is 81%.

* The vertex count without the effect of node building is 1159.