This level occupies the map slot E3M0. For other maps which occupy this slot, see Category:E3M0.

E3M0: Sector (M_XASECT.wad) is the tenth and secret map in the Armageddon episode of ZPack. It was designed by Xaser Acheron and uses the music tracks "Hocus Pocus Theme" by Rob Wallace and a MIDI version of "Klaymen's Theme" from The Neverhood composed by Terry Scott Taylor and sequenced by fatalM4. A third and short track, presumably composed by Xaser, is used briefly when activating the belltower. 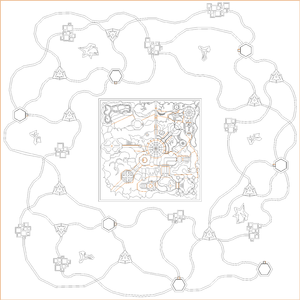 Map of Sector
Letters in italics refer to marked spots on the map. Sector, thing, and linedef numbers in boldface are secrets which count toward the end-of-level tally.

* The vertex count without the effect of node building is 8764.