This level occupies the map slot E3M11. For other maps which occupy this slot, see Category:E3M11.

E3M11: Cold as Ice is the eleventh and secret map in the Shadowlands episode of Masters of Chaos. It was designed by Caleb26 and uses the music track from Heretic's E2M4: The Ice Grotto. 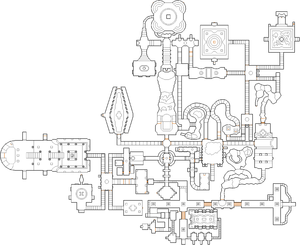 Map of Cold as Ice
Letters in italics refer to marked spots on the map. Sector, thing, and linedef numbers in boldface are secrets which count toward the end-of-level tally.

Be wary of the dark-blue ice patches throughout the level, as they have low friction and will impede your movements. This level also uses a number of lethal pits - you may want to keep a Chaos Device ready to use if you fall into one.

Slay the three wendigos in front of you and take the Frost Fang at the north end of the room, then go through the archway in the north-west corner and follow the tunnel to a junction with a barred western exit. Open the north wall and kill the wendigo behind it, then go left or right and ride the lifts up to an icy area with many pods.

Take the Jade Wand between the lifts, then head north past lava pools and sabreclaws and go through either of the stone doorways at the far end of the room. Kill the two approaching butchers then turn round to press a switch in an alcove, which will lower a set of steps for you to descend. Go into the right-hand doorway at the bottom and kill more wendigos ahead, then go into the south-east doorway and open the south wall to find another passage.

Go down the steps and turn left to see some golems behind a crushing ceiling. Time your run past the crusher and head east through another passage to a snowy chamber with undead warriors, with four staircases leading away from it. Take the Wand of Embers then go down the north-east staircase to an icy room populated by nitrogolems and an iron lich; kill them all and press the switch by the lava-fall to the north (taking the Bag of Holding next to it)

Pressing the switch will cause most of the ice to fall away to lethal pits, before releasing gargoyles from the east and west walls. Wait by the switch until things stop moving, then carefully backtrack to the snowy chamber (killing some disciples of D'Sparil which have appeared here) and go down the north staircase to a room with a lava pool. Take the Phoenix Rod from the middle of the pool, which will seal the room entrance and spawn a Bormereth. After a few seconds, part of the north wall will open to reveal a switch - press it to reveal a teleporter at the south end of the room and go into it to return to the snowy chamber.

Head west past the crusher, then turn right and climb the staircase to an earlier room. Go down the south-west passage and kill the waiting ophidians, then head south up the staircase to a room full of icicles. Turn round at the top of the staircase and follow the dark curving passage to find the blue key on a ledge overlooking the starting room.

Drop off the ledge and kill the disciples which have appeared from behind the south wall, then go through the north-east archway and follow the passage to a room with an ice fountain. Turn left to kill the golems and undead warrior, then take the Ethereal Crossbow from the fountain and go north through a door requiring the blue key. Step forward and destroy the two wendigos behind the wall that opens in front of you, then follow the passage and go north-west when the path splits. Dispatch the sabreclaws and nitrogolem blocking the way and press the switch in the tunnel behind them.

Go back to the split in the path and go north into a stone passage, killing the weredragons ahead. Follow the passage to the snowy chamber you found earlier, then go up the south staircase and kill the butchers and dark bishop waiting at the top. There are two passages to the south - carefully take the Mystic Urn in the left-hand passage (there is a lethal pit right behind it) then follow the right-hand passage to an outdoor area. Press both switches in this area to lower the pillars and obtain a Quiver of Ethereal Arrows and an Energy Orb, then head north-east through an archway and follow the curving passage to a teleporter. You will be sent to a cross-shaped room covered in ice - kill any surrounding monsters then head south into a tunnel and turn left at the wall ahead.

Head through three small chambers to a staircase and follow it down to a room with a red floor. Collect the ammo before picking up the green key by the east wall, as this will seal the room entrance and release dark bishops and disciples into the room. Fight them off until the entrance opens again so you can escape.

Go back up the staircase and through the three small chambers, then go straight forward into a room with a Hellstaff. Take the weapon and climb the stairs behind it, then press the switch in the north-east corner of the stone chamber which is guarded by an undead warrior ghost. Backtrack to the cross-shaped room and head west to a set of steps. Climb the steps and turn left at the top. Ahead are two doors which opened when you pressed the earlier switch - kill the butchers behind the doors and follow the path behind them to a set of metal steps with nitrogolems at the top. Press the switch north of the nitrogolems and backtrack to the cross-shaped room, watching out for sabreclaws that have been released on the way. Back at the cross room, head north and climb a set of steps that have risen, then go forward to a door flanked by green key gizmos.

Pass through the door and kill the three weredragons that are revealed in front of you, then press the switch behind them to reveal a niche with a few pickups. Approaching these items opens the next wall to reveal two butchers guarding a Firemace - approach the weapon to lower the final wall and reveal a room with four staircases leading away from it. Kill the nitrogolems here then go up the south-east staircase to a dark room with a switch in its east wall - press the switch to lower several platforms holding golems, nitrogolems and undead warriors then go back up the stairs.

Take the south-west staircase this time and follow it down to a room with many icicles and a fountain. Kill the green chaos serpents then go to the north wall where an undead warrior ghost guards another switch; press it to release some fire gargoyles and weredragons from wall alcoves, then go back up the stairs and take the north-west staircase - the two switches you pressed earlier will allow you to reach the top where you will find a large stone hall with a raised central area. Head west across the blue steps to the opposite end of the hall and lower the lift at the end, then ride it up and turn right to find another switch. Press it and take the three items on the nearby pillars (including a Tome of Power), then climb the blue steps again to the raised area and kill the sabreclaws and undead warriors that have been released from wall alcoves. Take the ammo pickups in this area then step into the teleporter in the north wall to return to the starting room.

Kill some more disciples that have been released into the area then go through the north-west archway and follow the passage to the barred doorway. You will see that the south wall has opened to reveal a new area - go through this wall and take the left-hand passage, then turn left and follow the hallway to an icy area with chandeliers. Turn left and kill the ophidian ahead, then turn left to find another ophidian guarding a switch - pressing it will release weredragons, undead warriors and sabreclaws from three alcoves in the area. Kill these monsters then head south through the wall that the weredragons were hiding behind, following the steps down to a seemingly empty room with a switch at its north end. Pressing the switch opens the way to the level exit, but also reveals a vampire in front of you; two more vampires will also be released into the hallway at the top of the steps. Fight your way out of the trap then backtrack to the junction where you found the barred archway - the bars have now lowered.

Head west, following the passage to a long icy hall. Destroy the approaching sabreclaws and press the switch at the north end of the room, which will open the walls on either side to reveal fire gargoyles and several wendigos; run back to the room entrance to avoid being surrounded. Once everything is destroyed, step into the teleporter in the west wall to be taken to E3M5: Quarry.

Follow the directions for secret #1 below, but press the switch in the north-east corner of the ice cave instead to open the central column and reveal wendigos. Leave the room and go south at the T-junction to enter a snowy room with a fountain. A Skull Staff can be found in the middle of the fountain, guarded by chaos serpents.

Before following the curved passage to the blue key, go east down a set of steps to a snowy cavern containing wendigos. A Shadowsphere can be found at the south end of this cavern.

From the room with the blue key door, leave the room by its south exit and go up the steps to a cave covered in ice. Head north to enter an opening in the wall (going west will drop you into a lethal pit) and follow the path to a cavern with a light-blue ice column. Go to the north side of this column to find a Dragon Claw inside it.

After passing through the green key door you will reach a room with four staircases leading away from it. Go down the north-east staircase to a hallway with three doors, and go through the south-east door to find a switch being guarded by an undead warrior ghost. After pressing the switch, backtrack to the starting room and go through the north-west archway and along the passage behind it, going south at the junction. Take the west tunnel then turn right to see a Chaos Device being guarded by wendigos.

* The vertex count without the effect of node building is 5396.