E3M1: A Warm Welcome is the first level of Serenity. It was designed by Bjorn Hermans and Holger Nathrath, and includes a custom music track. 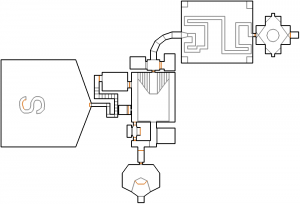 Map of A Warm Welcome
Letters in italics refer to marked spots on the map. Sector, thing, and linedef numbers in boldface are secrets which count toward the end-of-level tally.

Open the door directly in front of you (to the west.) You will find a dark, winding path lined with health bonuses. Tread this path carefully; the rest of the room is a damaging floor that deals 20% damage. Head downstairs, open the next door, and head up either one of the staircases you find. Head south, go west, and head through the southern door. Jump into the pit, get the yellow key, and board the perpetually-moving platform at the north of the pit, marked by a bright patch of light. Open the door to your northwest, use the elevator at the end of the passage, and open the yellow door at the opposite side of the platform. Open the door to your west, and ascend the stairway until you find a large, dark room. Enter this room to reveal the letter S in the floor, and then run west across the S.

On hard skill, a demon (thing 262) and a spectre (thing 267) overlap one another; thus, they are immobilized and unable to teleport into the level. As a result, only 98% Kills is possible.