E3M1: Abyssal Stronghold is the first map of Inferno in Doom the Way id Did. It was designed by Jacob Zuchowski (ellmo) in the style of Sandy Petersen. The par time defined in the DEHACKED lump is 1:15. 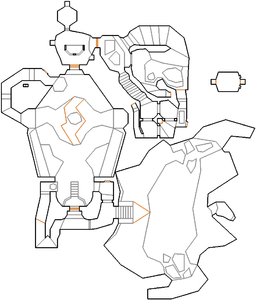 Map of Abyssal Stronghold
Letters in italics refer to marked spots on the map. Sector numbers in boldface are secrets which count toward the end-of-level tally.

From the cave where you start head out into the field and, to avoid the blood, use the stepping stones on either side. Grab the clips in the southeast. Enter the stronghold and turn right to find a switch there. Press it to open the rest of the passage. You can either take the next door you see, or go further down the passage, grabbing a shotgun at the end. To cross to the other side of the field, drop down and go left, through the hall to an eye switch which triggers a nearby lift. Once on the upper floor you should be on the other side so enter the next room. When you enter this room, take the door to the right and you will find yourself at the fork. Take the left-hand path, finding another switch tucked away in a cave. Pressing this raises a lift. Take this lift up to the final switch which lowers the teleporter to the exit.