Unchecked
This level occupies the map slot E3M1. For other maps which occupy this slot, see Category:E3M1.

E3M1: Altar of Blood is the first map of the third episode of Strange Aeons, designed by Impie in 2015 and constructed in Doom Builder 2. 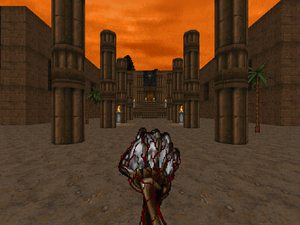 The Traveler is welcomed to prehistoric earth by an eerie temple to the Spinner in Darkness.

When you enter the temple, a Rage Sphere is revealed. Your only weapon on the map is the Scepter of Souls, so enhance it with the sphere and kill the platoon of Devils worshiping at the altar. Grab the blue skull and throw the switch to access the fountain room, from which the eerie laughter of Star Vampires can be heard. Kill the monsters and throw the switch to create a water staircase both at the fountain (giving access to another Rage Sphere) and the waterfall room on the opposite side of the temple, where the red skull can now be accessed. After another Star Vampire ambush, the doors will open. The exit slipgate is beyond the red door.

A green armor has been abandoned around the left side of the temple. Grab it before heading inside.

Before leaving your house, "use" the living room bookcase to open the bathroom door, revealing a Shotgun. You cannot access the other secret without this weapon; shotgun shells found in the temple hint at the Shotgun's existence.

Hug the left wall from the temple entrance and look across the courtyard from the furthest window: you can just make out a skull switch on top of the wall. Shoot it with the Shotgun to open the cage with the Light Amp Goggles. Be careful entering the cage, as it houses an adult Leng Spider. The cage switch lowers the altar and allows you to grab the Soul Sphere left tauntingly on display.

Lovecraft's work made many references to Ancient Egypt as well as even older, more alien civilizations existing on prehistoric earth.