E3M1 is the first of two bonus levels in Aliens TC. It was designed by Justin Fisher. 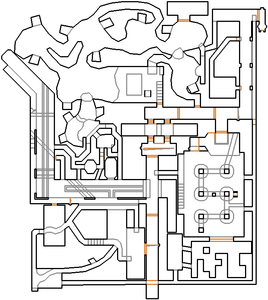 Map of Bonus Level
Letters in italics refer to marked spots on the map. Sector, thing, and linedef numbers in boldface are secrets which count toward the end-of-level tally.

* The vertex count without the effect of node building is 1071.

During development, E2M5: Atmospheric Processor became so large that it was split in two, this being the second part. Justin Fisher states in the readme that it is the most difficult level in the project, and even he finds it challenging.