E3M1: Bormoth is the first map in the Shadowlands episode of Masters of Chaos. It was designed by Caleb26 and uses the Hexen music track "Winnowing Hall". 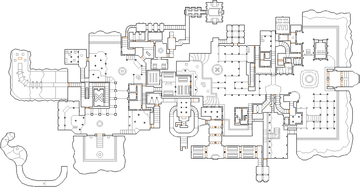 Map of Bormoth
Letters in italics refer to marked spots on the map. Sector, thing, and linedef numbers in boldface are secrets which count toward the end-of-level tally.

As the level starts, turn round and take the Gauntlets of the Necromancer behind you. Press the switch on the north wall to lower a staircase, then go down it to an area with a small fountain. Head north-west and follow the path between the buildings to a gray pillar with a brazier, then turn right and climb the steps ahead. Take the Ethereal Crossbow at the top then go through the stone door to a room with bookcases. Go round the corner and kill the golem ahead, then open the door in the south-west corner.

Turn right and go around the corner, then open the bookcase ahead of you (golem ghosts will appear here on medium and hard skill levels). Go down the staircase and carefully move through a passage with three crushing ceilings, then go down another set of stairs and turn left at the bottom. Head into a chamber with stained-glass windows, then turn right and kill the disciples of D'Sparil guarding the green key in front of you.

Take the green key then backtrack to where you found the Ethereal Crossbow, watching out for two undead warrior ghosts that have been released on the way. Back at where you found the crossbow, go south down the steps and through the door next to the green key gizmo. Turn left and follow the short passage to a dining room with fire gargoyles, knight archers and a sabreclaw.

Turn left and walk up two steps, take the Bag of Holding from the table in front of you then turn left to enter a dark library. Slay the two nightmares hiding in here and press the switch in the north-east corner, then go back through the green key door and head south to the area with the fountain. Head east up a set of steps to an area with barrels, then go through the door ahead to find a Silver Shield.

Climb the stairs (which raised when you pressed the earlier switch) then go through the wooden door and turn right, destroying the sabreclaw ahead. Go past it to a room with wooden columns and go down either of the staircases in the east or west walls, following the passages to an area with three golems. There are two alcoves behind the golems - press the switch in the left-hand alcove to reveal a teleporter in the right-hand alcove. Step into this teleporter and then walk forward to collect the blue key.

Drop off the ledge and kill the three roaches which have been released into the room ahead. Backtrack to the dining room past the green key door, and exit through the wooden door to the east. Head south-east down a set of steps (taking a Tome of Power on the way) then go east to a wooden staircase leading up to a set of bars. Climb up five steps then enter the door on the left, kill one or two waiting nitrogolems and climb the steps to a ledge with barrels and archers. Go east to climb up another staircase leading to a door requiring the blue key. Go through the door and turn left to see a windowed area with golems and an undead warrior. Enter this area and press the switch in the south-west corner, then backtrack to the barrel platform to find that a bridge has risen leading into the building to the north.

Cross the bridge and head straight forward through the hallway until you see a wide doorway on the right. Enter this doorway and go up the curved staircase, then turn left and kill the gargoyle ahead which is guarding two doors - the right door leads to a Crystal Geode and two Discs of Repulsion, and the left door leads to a room with sloped archways. Turn left at the chandelier and kill the two sabreclaws here, then go through the door next to them to reach a library. Head to the north wall and press the switch here, watching out for two nightmares that try to ambush you. Pressing the switch allows you to reach the blue key, but it also spawns golems, nitrogolems and undead warriors in various locations.

Leave the library and kill the golems that have appeared outside, then backtrack to the bridge and head east to drop off it. Turn left and approach the circular structure with a brown pillar ahead of you, where some nitrogolems and undead warriors have appeared; when you reach it, turn left and climb the stairs ahead. Turn right at the top of the stairs and go through the now-open door to enter a small building with an iron lich and some nitrogolems. Kill them, then climb the steps and take the yellow key sitting at the top.

Leave the building and go back to the circular structure, then go south to a large wooden staircase. Climb it and take the Quiver of Ethereal Arrows at the top, then go south to drop off the ledge and turn right. Go into the tunnel ahead to enter an enclosed area with a curved staircase, then climb this staircase and turn right at the top. Walk forward and enter the tunnel on your left which leads back to the barred staircase. From here, backtrack through the level to the area where you found the Ethereal Crossbow then head west to another area with many barrels, going through the door in the west wall. Turn left and kill the ophidian at the top of the stairs ahead, then climb the steps and turn left at the top. Head straight forward and follow the raised walkway, which will bring you to a door with a yellow key gizmo.

After going down the staircase at the start of the level, turn left and climb up the steps to a walkway leading to a switch. Press the switch to lower a lift behind you, leading to a Bag of Holding and two Quartz Flasks.

From the ledge with the Ethereal Crossbow, go north-east through a door and go through the door due north of the bookcase - you will enter a dark room with a Tome of Power, guarded by one or two nightmares. Also from this ledge, head west through a door surrounded by barrels to reach a storeroom with crates - a Shadowsphere is hidden in the north-west corner.

Climb the stairs past the green key door and go through the door at the top. Turn right to see a hallway with two more doors - open the first one to find a Dragon Claw guarded by an undead warrior ghost.

A Morph Ovum can be found on top of the large fountain in the east area of the level. You can climb on to the fountain by jumping from the ledge to the north.

After entering the building with the switch that opens the blue key building, climb the stairs and go through the door on the right. Turn right and look around the corner to find a small door - behind it are two or three gargoyles guarding another door. Go through this to find a Map Scroll guarded by a nightmare.

After passing through the yellow key door, go down the right-hand staircase to find a room containing another Morph Ovum, guarded by disciples.

* The vertex count without the effect of node building is 4524.