E3M1: Gates of Hades is the first map of the Woe episode of No End In Sight. It was designed by Emil Brundage (NaturalTvventy). 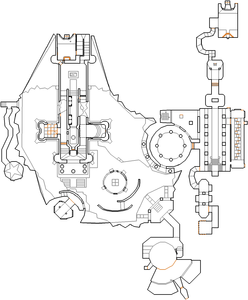 Map of Gates of Hades
Letters in italics refer to marked spots on the map. Sector numbers in boldface are secrets which count toward the end-of-level tally.

You start the level on a tower in the middle of the level. Take the two boxes of bullets then drop to the ground below and head south-east past two brick walls to a structure with square gray supports, climb the steps and follow the passage to a blue skull key. Go back outside and enter the building on your right to find a room with a blood pool, walk round it to a door requiring the blue key then go through and turn right. Walk down and up two sets of steps then walk through the doorway in front of you to find a room with many metal columns over a blood pit - press the skull switch in the corner to lower the columns, then run across them as they descend to reach the ledge on the other side of the pit. Press the gargoyle switch to lower the surrounding walls so you can leave safely.

Go back outside and head west past the starting tower to find some steps leading up to a large building, go inside and turn left to find another blue key door. Go through it and immediately turn right to enter a room with a small well then look south to see an eye switch behind a pillar with a beating heart - shoot the eye switch then go back to where you found the blue key to find that a passage has opened, allowing you to walk across the dried-up water pool. When you reach the ledge on the south side of the pool, two walls in front of you will open and release a number of demons - push past them to the exit door and press the switch behind it to finish the level.

A radiation shielding suit can be found on the starting tower on I'm Too Young To Die (ITYTD) and Hey Not Too Rough (HNTR) skill levels. If you go south-west from the starting tower you will see a brick wall with a small doorway - go through this doorway and press the misaligned wall on your left to lower a lift, which will take you up to a room with another radiation suit, or two on ITYTD and HNTR.

After entering the building on the west side of the level, turn right and follow the passage to a room with numerous satyr faces. Climb up the steps to the east to see part of a skull switch behind a dead marine; if you shoot the switch then three of the satyr faces will light up. This shows you which switches to press to open secret #2.

From the blood pool room, head north-east into a room decorated with stone gargoyle faces. On HMP or lower, there are some health bonuses in the shape of an arrow which points at the north side of one of the columns - press on this side and some of the red and white squares to your right will light up. This will show you the correct route for navigating the teleporter puzzle leading to secret #3.

This information was last verified in its entirety on August 11, 2021.

* The vertex count without the effect of node building is 2187.