E3M1: Jovian Stonehenge is the first level of Hell's Gate - The Red Spot of Jupiter, the third episode of The Lost Episodes of Doom. It was designed by Bob Carter and like all levels made by him is rather simple in architecture. 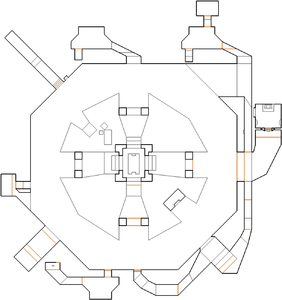 Map of Jovian Stonehenge
Letters in italics refer to marked spots on the map. Sector numbers in boldface are secrets which count toward the end-of-level tally.

Although the level features many areas to explore, you can complete it quickly without visiting that areas. The level also features two barons of Hell when playing on HMP and higher.

You start in the center of the map where the stonehedge-like structures (as the name of the map implies) can be seen. If you are playing on HMP or higher skill level, there are two shotgun guys on the higher ledge in the starting room, so be careful. There is also another shotgun guy in the far south west, who will soon hear your shots. Since he waits in the darker part of the overall central area, you probably miss to see him sometimes. To get started leave your room and walk all around the central building to find useful items (this includes shotgun, chaingun, green armor and helmets on easy and hard skills).

If you are ready to finish the level, without visiting optional parts, read below.

All you need is the red keycard and two switches to press. Head to the east room that is green (there are two lamps). If you go forward and turn left you will come to a wooden door. The only way to open it is to shoot its switch located in the room behind this door. Stand by right-hand window gap. You will see enemies in the room that will prevent you from shooting the button or even seeing it. Destroy them all and shoot the aforementioned button. The door will open. Enter inside. Once you enter the door will close, trapping you in the room. There is nothing to fear, since the door can be reopened if you shoot the button again (fist is also allowed). Now, if you stand on the throne or even just approach it, a wall will open to the left. This reveals two switches mentioned above. The gargoyle will unlock the red key, and the lion will open the exit room. Press them both. Now, as aforementioned, to get out of the room shoot the button to open the door, and return to the center of the map.

Carefully walk around the central structure to find the accessible red keycard. It is near the lattice ledge. Now, head to the south of the map and you will come to two lamps and a blue wall that requires red key. Open it and go all the way forward to finally come to the exit switch.

If you cross the eastern stonehedge under, the ledge in the starting room will lower. It has the blue keycard, a plasma gun and, probably, two former sergeants.

You can you find a megaarmor in the east side of the central area.

The lift in the west side of the map leads to a room having a light amplification visor.