E3M1: Ophidian Temple is the first and final map in episode The Ophidian Nest of Heretic Upstart Mapping Project. It was designed by Rolo.

When played using Doomsday, this level uses the music track "Watch" by Kevin Schilder. Source ports that support the MAPINFO lump will not play any music at all, due to an error in the definition for this map. 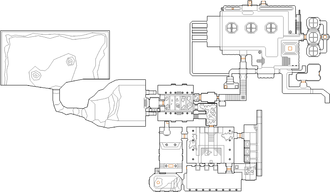 Map of Ophidian Temple
Letters in italics refer to marked spots on the map. Sector, thing, and linedef numbers in boldface are secrets which count toward the end-of-level tally.

Open the door in front of you to enter a hall with gargoyles and golems. There are two exits on the opposite side of the hall, but one is locked by a green key door; take the Ethereal Crossbow in front of this door, then go through the archway on your right and go round the corner to find three golems in front of a door. Head through the door to another large hall with a couple of undead warriors and three disciples of D'Sparil, then leave by the west door to confront a couple of nitrogolems along with two undead warrior ghosts and disciples to the south. Head up the steps either side of the altar ahead, then turn right and go down a curved staircase to find the green key being guarded by weredragons.

Head back to the starting area, watching out for any new enemies that have teleported in, and open the green key door you saw earlier to find an iron lich as well as Timebombs of the Ancients, a Bag of Holding and (on bringest them oneth skill level or lower) Quartz Flasks. Go through the next door and head down two flights of steps to find golems and fire gargoyles in front of another door which leads to a large water pool. Turn right and head forward until you go down some stairs, then enter the doorway to your right to find a sabreclaw guarding a Hellstaff. Follow the water round to a door and open it to find a room with more weredragons, press the switch on the east wall then head back to the large hall; once you get there, turn right and head up another set of steps to find that a platform holding the blue key and some Claw Orbs has lowered, guarded by a couple of ophidians.

Taking the blue key will cause various enemies to teleport into the hall. Walk north until you drop to the floor below and turn right to see a yellow key door in front of you, turn left and go up a staircase guarded by sabreclaws to a green walkway then follow it round until you reach another door between two blue gizmos. Open the door and press the switch behind it to raise a bridge leading to the yellow key - picking it up will lower a wall to your left and release gargoyles, sabreclaws and three iron liches, so grab the Phoenix Rod behind the key before you drop down to confront these enemies. Cross the pool and return to the yellow key door you saw earlier, open it to confront four sabreclaws then try to open the exit door behind them; two walls to your left and right will lower to reveal more sabreclaws as well as undead warriors. Go into either chamber to find a tunnel leading to a sky floor, which you can step on to finish the level.

From the hall in the center of the level, head through the east door then go south past two gargoyles and an ophidian to reach a small chamber with a Dragon Claw as well as Claw Orbs and an Energy Orb.

Due to an error in the MAPINFO lump, source ports that use this lump will not play any music in this level. This bug does not affect Doomsday, which uses its own definition that includes a replacement track.

After passing through the green key door, head through another door in front of you. There are four stacks of Mace Spheres and possibly a Firemace behind the right-hand wall, but there is no way to reach those items without cheating as the wall cannot be opened and it is not possible to teleport into the room.

* The vertex count without the effect of node building is 3950.