E3M1: The Beginning of the End (Curse of D'Sparil)

E3M1: The Beginning of the End is the first map of Curse of D'Sparil. It was designed by Kristian Käll (Kristus) and uses the music track from Heretic's E1M1: The Docks. 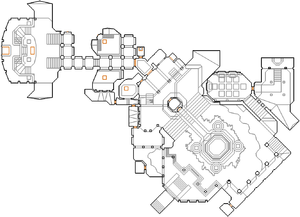 Map of The Beginning of the End
Letters in italics refer to marked spots on the map. Sector numbers in boldface are secrets which count toward the end-of-level tally.

Take the Silver Shield, Chaos Device and two Quartz Flasks on the tombs, then go east through a door to an area filled with water. Follow the wooden walkway up the steps to an area guarded by (depending on skill level) golems, nitrogolems and ophidians and take the yellow key sitting on a raised step.

Backtrack to the blue-floored structure and head north-west down and up two sets of yellow steps, watching out for (depending on skill level) golems, nitrogolems and ophidians waiting for you. Look north-west to see a large door between two yellow key gizmos and open it, kill the three disciples of D'Sparil waiting behind it then go through to see two more doors. The right-hand door requires the blue key, while the left-hand door leads to a ledge guarded by gargoyles, plus two ophidians on hard skill level.

Kill these enemies then step north-west off the ledge into a pool of water with two golems, climbing the wooden steps to a switch (guarded by another ophidian on hard skill level). Pressing the switch opens a nearby door, but also causes disciples to teleport to the ledges above you; depending on skill level, fire gargoyles, nitrogolems or ophidians and undead warriors will also appear on the ledge you just stepped off. To avoid being surrounded, step backwards into the teleporter in the water then go back through the door behind you so that all the enemies approach from one direction.

Once the way ahead is clear, head west through the door that opened when you pressed the switch and follow the passage behind it, collecting five Timebombs of the Ancients and two stacks of Ethereal Arrows that appear here on hard skill levels. Press the switch at the end of the passage to lower the wall on your left, revealing a stone structure guarded by four disciples as well as four fire gargoyles, nitrogolems or ophidians depending on skill level. Climb the wooden steps in the structure and take the green key sitting on the gray step.

After taking the green key, eight fire gargoyles, nitrogolems or disciples will teleport in depending on skill level. Fight or avoid them as you see fit, then backtrack to the blue-floored structure near the start point and follow the blue floor north-west to a skull door. Open it and press the switch behind the door, which will lower the fences behind you blocking the blue key.

Watch out for disciples teleporting in around the blue key as you approach it. After taking the key, go north-west and head through the door requiring the yellow key again. Open the gray door on your right next to the blue key gizmo, slay the disciple waiting behind it and step into the exit teleporter to finish the level.

After climbing the steps in front of you at the start, turn left and head west to a door. Behind it are three Crystal Geodes and two crystal vials, guarded by a disciple on medium and hard skill levels. From here you can head north to another door leading to a stone passage – the passage will lead you through two more doors and contains one or two Crystal Geodes, a Quiver of Ethereal Arrows, two more crystal vials and a Silver Shield.

From the structure containing the blue key, look east to see a set of steps leading up to a ledge which you can follow to find an Ethereal Crossbow. Near the crossbow is a door with two Quivers of Ethereal Arrows and a Quartz Flask, which are guarded by a disciple on medium and hard skill levels.

After getting the yellow key, head north-west from the structure with the blue key until you reach two wooden doors, one of which requires the yellow key. Turn round to see another door in a stone pillar which also requires the yellow key - behind it is a Quiver of Ethereal Arrows and a Crystal Geode, along with a Ring of Invincibility on easy skill levels or a Mystic Urn on medium or hard. The items will be guarded by four fire gargoyles on hard skill levels.

West of the green key is an Enchanted Shield and three crystal vials. Be careful when approaching the items as you will trigger a crushing ceiling.

* The vertex count without the effect of node building is 2483.