E3M1: The Docks is the first map of episode 3 of Heretic Treasure Chest. It was designed by Sp_d00d and uses the music track "Dark" from Heretic, created by Kevin Schilder. 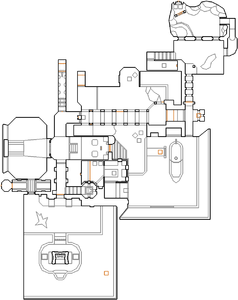 Kill the nitrogolem ghost (or three on bringest them oneth (BTO) skill level or higher) on the bridge in front of you then go to the end of the bridge to find two switches that will open the metal barriers ahead. Step through the barriers, press the switch on the column between the barriers to lower a pillar holding an Ethereal Crossbow, then follow the passage round the corner to confront nitrogolems (plus sabreclaws on BTO or higher). Go down the steps in the next room to a switch and press it to open the silver door at the top of the steps, then push past some sabreclaws and undead warriors until you turn a corner. Ahead is the yellow key, guarded by an iron lich on BTO or higher or two undead warriors on thou needeth a wet-nurse (TNAWN) or yellowbellies-r-us (YRU).

Go back to the switch you just pressed and open the yellow key door behind it, go down the steps and drop into the water then look west to se a doorway with a Bag of Holding. Go through the doorway and climb up the gray step then head west past some nitrogolems and sabreclaws to find a storeroom with a Dragon Claw and another switch. Press the switch to lower the water level outside then drop into the water and head east and north around the boat to find a tunnel containing undead warriors, who are guarding the blue key. When you take the key, a wall behind you will lower to reveal a lich.

Destroy the lich and ride the lift behind it up to a wall which you can open to return to the starting point, then retrace your steps to where you found the yellow key - just before it is a door requiring the blue key, which leads to an outdoor area with (depending on skill level) gargoyles or sabreclaws in front of some bars. Head west to a doorway guarded by two undead warriors, go through it and turn left to see a Silver Shield in front of a switch - press the switch to lower the bars, step over them then push past some sabreclaws to find the green key being guarded by a lich on BTO or higher or two undead warriors on TNAWN or YRU.

Go back to where you found the blue key and open the green key door to the north, destroy any nitrogolems blocking the way forward then head into a storeroom with fire gargoyles. Head west down a staircase to find some undead warriors (and sabreclaws on BTO or higher) guarding a switch, press it then go back to the storeroom and head east through a now-open doorway. Follow the passage to a cavern with gargoyles and open the exit door in the north-west corner, destroy two sabreclaws that appear in front of you then press the blue switch to finish the level.

After passing through the yellow key door, head due east to find a Morph Ovum on a dock. A closet containing fire gargoyles will open overhead when you collect the item. 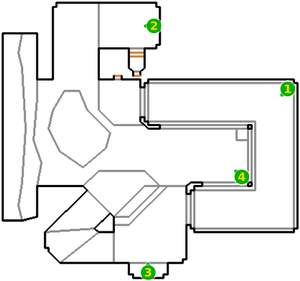