(Redirected from E3M1: The Storehouse)

E3M1: The Storehouse is the first level in The Dome of D'Sparil episode of Heretic. It shares its music track with E1M1: The Docks and E4M6: Halls of the Apostate. 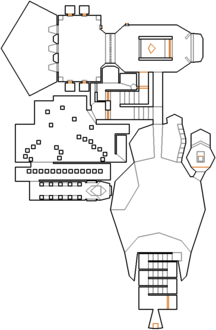 Map of The Storehouse
Letters in italics refer to marked spots on the map. Sector, thing, and linedef numbers in boldface are secrets which count toward the end-of-level tally.

The level is remarkably tough on smite-meister or higher due to the small amount of ammunition considering the population of strong monsters. The situation is worsened by the fact that the Ethereal Crossbow is not anywhere in the level. Thus, even if weredragons dropped ammunition, it is for no use. You may try to lure the monsters against each other to preserve valuable shots.

Press the wall section with the bird motif in front of you to get out of the tiny cell. Take out the gargoyles, but do not bother with the disciples behind the barred windows to the west. Just avoid their attacks. Use the switch to open the gate. The other wall sections with the bird motif can be opened to get ammunition. Just on the other side of the gate to the left is another switch. It will lower the corner columns providing access to the much-needed Dragon Claw and the Bag of Holding. You can now take out the undead warrior you may or may not have seen in the other area. Rest assured, however, that he saw you and will be coming for you. Go back to the other area. You can see the green key through the barred window, but you cannot get it yet. Collect all the ammunition and head through the door to the south.

Go down the stairs and past the green door. Do not go up the other set of stairs but enter the wooden door. Just before going further, proceed to a darkened passage to the right. Get the Chaos Device. Enter the storehouse and take out the sabreclaws. In the southeast corner of the storehouse, there is an alcove with a Silver Shield. You will see an open area with large wooden pillars. To get to the other side, you have to go all the way to the east and back to the west. If there are problems in killing the weredragons that block your path, lure them deep into the storehouse hall; the columns and barrels there confuse them so that they will not enter the pillar passage again. Proceed towards the new area. Get the yellow key in the back room.

Head back to the yellow door. Do not go up the other set of stairs. You will not have enough equipment to deal with what is up there.

Go through the yellow door and get the green key. When you grab it, a wall section to the east will open containing undead warrior ghosts. Take them out or avoid them and head for the green door. Inside you will meet a new monster, the ophidian, which is the last monster type in the game. The only advanced weapon you have is the Dragon Claw so take him out as best you can. Get the Map Scroll and press the switch. Now, you finally need to enter the new staircase. When you walk out into the water, you will see an iron lich. If you have run out of ammunition, it is the moment you had better rush. There are some choices you can make:

The staircase on the platform takes you to the mosaic textured exit room. Another iron lich blocks your path on skill level three or higher. Try to get past the monster if fighting is not a choice. The exit teleporter is at the southern end of the room.

Linedef 295 has its upper texture on the wrong side in the hallway leading to the flooded outside area. The ceiling height difference of the neighboring sectors is eight map units, so the ceiling looks a bit distorted when the flawed wall is approached from the storehouse door.

* The vertex count without the effect of node building is 674.