E3M2: City of Corpses is the second map of Inferno in Doom the Way id Did. It was designed by Walter Confalonieri (daimon) and Jacob Zuchowski (ellmo) in the style of Sandy Petersen. The par time defined in the DEHACKED lump is 2:00. 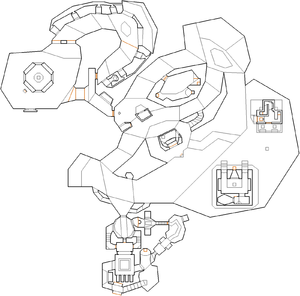 Map of City of Corpses
Letters in italics refer to marked spots on the map. Sector, thing, and linedef numbers in boldface are secrets which count toward the end-of-level tally.

First, go left down the first hallway following the path to a shotgun. The ground lowers at this point, take the path going northeast to a hall reminiscent of the hall in House of Pain. Take the next door to a switch which raises a bridge going to the rest of the level. Now backtrack to the beginning and approach the door in front to open it. With the bridge available you can cross into the field. In the field, climb the rocks going northward and eastward until you reach the blue skull key. Grab it and find the blue skull door on the west side of the field. Go here, and then through the next door. Follow the long road, grabbing the radiation suit once the damaging blood starts to show itself. Also watch out for lost souls in pursuit. At the end of the road is a large room with a structure in the middle. Go to the southwest corner to find a switch which opens the structure and allows access to the yellow skull key, then use the lift in the southeast to get out. Move back into the field and find the yellow door. It should be slightly up the rocks from the blue door. In here, enter the teleporter and then enter the next teleporter to the next area. Climb the stairs to the ledge with imps and a radiation suit, and jump out the window to a switch which raises a bridge accessing the southeastern part of the field. Go there and enter the southern building. Enter the back room of this building and flip the switch to lower the red key. Now go to the northern building. In here are two teleporters, and the exit is behind a cage to the left guarded by a baron of Hell. If you take the straight path with a cacodemon on it, you will wind up on the ledge on the outer side of the building, where you can go around to reach the exit.

If you go down the right path in the exit building, the teleporter takes you to a ledge with a plasma gun