E3M2: Doom - The Movie is the second level of Serenity. It was designed by Bjorn Hermans and Holger Nathrath, and includes a custom music track. 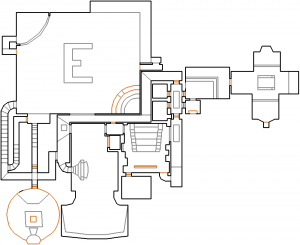 Map of Doom - The Movie
Letters in italics refer to marked spots on the map. Sector numbers in boldface are secrets which count toward the end-of-level tally.

Open the door in front of you. Ascend the staircase under the archway, and head through the corridor. At the end of this corridor is a door; open it to find a passage with four doors. An alternate route to get here would be to open the door in the middle of the first passageway, jump through the east window of the room into the movie theater, enter the southeast opening, ride the elevator, and open the northern door. Either way, open the northeast door, and toggle the switch at the west of the room to open access to the room directly south of you. Enter this room, and flip the switch to lower the walls at the north and east of the previous room. Head back into the other room and open the blue patch in the wall at the east. Step onto the platform, flip the northern skull switch, and enter the teleporter in the alcove which appears to the south. Descend the hill you stand on, which will cause the letter "E" to rise from the floor, and head up the stairs at the southwest of the room. Ascend the next set of stairs, and open the next two doors you find. Go upstairs, head through the next door, and jump across the gap to the south. Head through the door, and jump into the pit. Press the unmoving patch of skin in the northeast of the room to reveal a platform in the south, climb onto the central platform, and press the pillar in the center.

It is possible to prevent 100% Secrets by erasing the secret property from secret #2 (see Secrets.) If this happens, only 50% Secrets will be possible.

* The vertex count without the effect of node building is 609.

An early version of this map appeared as E2M1 of the collection "Nathrath's Fab Four" (NATHRATH.WAD).[1]

This level is based significantly on MINE1.WAD, an example WAD that was included with Geoff Allan's Doom Editor - The Real Thing v2.60b4.[2] It proliferated on BBSes throughout 1994 with no attribution, and was used as the basis for some levels, including by designers without any knowledge of its authorship. Allan is not credited in Serenity's textfile, nor does it mention MINE1.WAD.

The movie screen shows a shot of the Supreme Leader, as portrayed by actress Anjelica Huston in the 1986 3D film Captain EO, originally exhibited at Epcot.